The gaming brand nubia launched yesterday the nubia Red Magic 5G for global sale with prices starting from $579/€579/£539. Now, a new smartphone is incoming, called nubia Play, and it will be revealed on April 21. 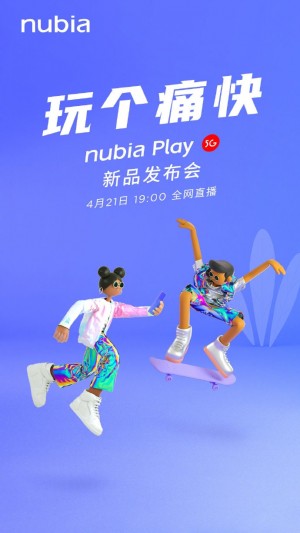 The poster appeared on nubia’s official Weibo page and it doesn’t really say much, aside from the fact that we are looking at a 5G smartphone. The post simply says “have fun”, which is likely a device for younger active people. We don’t know if it will be a gaming handset - it is more likely to be a midranger lineup to follow the steps of the nubia M2.

We haven’t seen many phones from nubia after ZTE had troubles with the government of the United States after breaking an embargo. The flagship Z lineup toned down its launches, mixing itself with the X family in dual-screen territories.

Seeing a new smartphone that is not a Red Magic variation is a positive sign that ZTE’s subsidiary is getting back in the smartphone business, especially after it introduced the new logo on Monday.