Some early adopters of the Nokia 5 have been facing an issue with the Dolby Equalizer that won't open from select apps like Google Play Music or Spotify. When they try to access these settings from the aforementioned apps, a white screen shows up instead.

Well, when the problem was brought to the company's notice, it was quickly acknowledged, with a promise that a fix for the issue will be made available through an update. 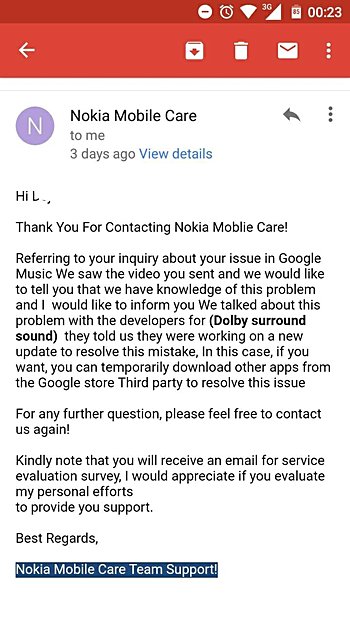 Sadly, there's currently no information on exactly when the update will arrive, although we expect that to happen sooner than later. Meanwhile, as the company has suggested, those facing the issue can try using a third-party music app from the Play Store.

The Nokia 2 appears in artist renders

HMD now owns 500 Nokia design patents, including one for the Lumia Camera UI

So far those 430 based phones has got software updates very quicly, so most likely this will too. It is nice to see manufactures that does care about software updates. Most others (not including Apple) just sell the phone and then forget the upgrades...

Yes, hopefully it will happen sooner than later (for their respective owners/ users, etc.).