Verizon has started pushing out a new update to Samsung Galaxy Note8 units on its network. Arriving as software version NMF26X.N950USQU2BQJA, it's mainly a security update but also includes some camera-related changes.

Specifically, the following changes have been introduced in the Camera app: the Live focus ready button now has a bright yellow background, light and distance guidance is now easier to read, and the back button now takes you to normal Camera mode.

As for security-related changes, the update includes Android security fixes for the month of October as well as fix for the Wi-Fi WPA2 security issue (a.k.a the KRACK vulnerability).

Meanwhile, the unlocked variant - N950U1 - has also started receiving a new update in the US. Weighing in at 340MB, it's a security update that brings along latest, November Android fixes. No information on what other changes (if any) are included. 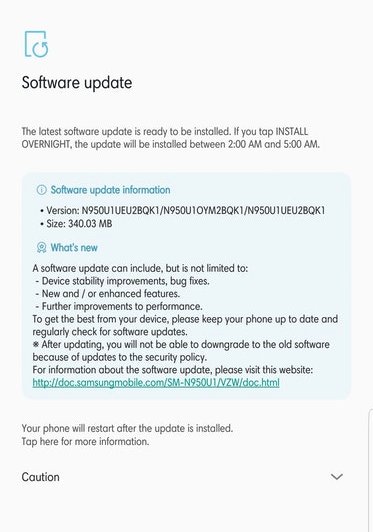 Samsung may be working on a Star Wars-themed Galaxy Note8

Let's see when it will arrive to Mexico's variant

My update was about 843MB. Though I have the unlocked international variant.