ZTE’s nubia line has some striking designs that house the powerful chipset of the day – for the Z17 that was the Snapdragon 835 and for this newly leaked nubia NX606J it’s the Snapdragon 845.

The Snapdragon 845 chipset runs Android 8.0, though this being a nubia means the OS is heavily customized. There’s 6GB of RAM (good) with 32GB of storage (half what the Z17s had). 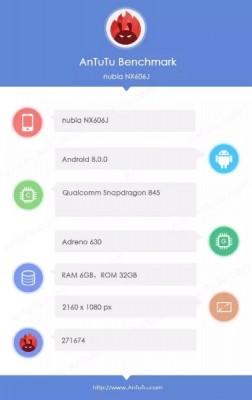 That’s a bit unexpected, but the AnTuTu score is inline with the Galaxy S9+ score.

"unexpected that the score is same as S9" .... wow, really?!@#$/ Im guessing not only samsung can employ software engineers to work on their ui! "Unexpectedly" this is not the first smartphone to be quicker than Samsungs flagship. Othe oem's ...

So, tell me, why do you hate dual cameras and volume buttons on the side?