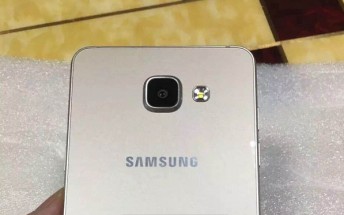 There's a certain set of stops a smartphone needs to make before it's allowed to hit the stores and in the US one such hurdle is the Federal Communications Commission (FCC). Its database is often a source of intel on upcoming model launches and in this case we're talking about the Samsung Galaxy A3 (2016) and the Galaxy A5 (2016).

Now, the vast majority of the data, included in one such filing, is dry legal documentation and not readily digestible test results. You're also unlikely to care about the FCC certification label placement, even more so now that manufacturers have generally switched to e-labels - a menu item buried somewhere in the settings. Both the A3 (2016) and A5 (2016) will have one those, by the way.

But the one concrete bit of info, revealed by the FCC (or Samsung, whoever took the screenshot and put in the docs) on this occasion, is the A5 (2016) battery capacity and it's a very generous 2,900mAh. That's a substantial 600mAh increase over this year's Galaxy A5, which was already a dependable performer in the battery department, as we established during our review time with it. The next-gen A3's papers aren't as revealing, though, so no precise numbers there.

The Galaxy A5 (2016) was already spotted in live images, once alongside the A7 (2016), and next to the A3 (2016) a week earlier. There was a certain inconsistency between the two sightings, but we'll be finding sooner rather than later which one is the real deal.

When to release? Any idea about release date?

Your motorola has a weak processor though. And very inefficient. You should smack it over your head, before throwing it away...