HMD started expanding its lineup from the middle down – 6, 5, 3 and soon the Nokia 2. According to Nokia Myanmar’s Facebook account, the new entry-level phone will launch in November. This is for the Myanmar launch, but there's no indication that it will launch sooner elsewhere.

The phone switches to onscreen buttons, while all the others (even the flagship 8) have capacitive keys. This way you don’t lose surface area from the already small 4.7” screen.

The Nokia 2 will not be the fastest – certainly not with a Snapdragon 210 chipset – but a whopping 4,000mAh battery will make this ideal for old-school folk. 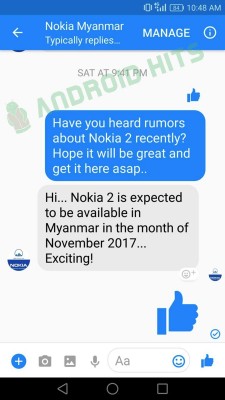 According to Roland Quandt, this will not be the only new Nokia phone to launch before the end of the year. With any luck, that will be the rumored Nokia 9, which also promises to have on-screen buttons but also a bezel-less design.

Nokia 2 photo shows front and back, but no specs

I actually use windows mobile and it has come a long way, but for office is the best;). Plus, there are lots of office people using it, so go troll somewhere else;). Processor Snapdragon 210. Poor choice, Nokia. A phone I had with SD210 was running S...

This will be nice for me. Small and huge battery, performance? If it good enough for WhatsApp then no problem.

Nokia 6 is not perfection camera both side