After rolling out the Android Pie update for Nokia 3.1 Plus and 3.1 in February and March, respectively, HMD Global is now seeding the latest version of Android for the Nokia 3.

The wait is over! Keeping up with our promise of 2 years of Android updates, Nokia 3 (2017) is now officially running on Android 9 Pie! Step up to Nokia smartphones, they Just Keep Getting Better! #GetSmart #Nokiamobile pic.twitter.com/Xz1JXt2Cet

The Nokia 3 was launched in 2017 with Android 7.0 Nougat and later picked up 8.0 and 8.1 Oreo. This makes for a very impressive support track record given the entry level nature of phone.

The Android Pie build for Nokia 3 carries version number V5.120 and brings in features like new system navigation, adaptive battery, and adaptive brightness, along with the May 2019 security patch. The update is rolling out over-the-air and should take at least a week or two to reach all the units. 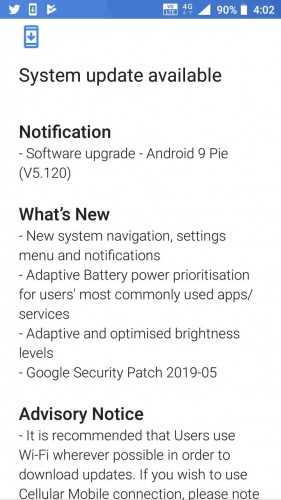 Nokia 5.1 is the latest handset to get Android Pie update

Nokia 3.1 Plus starts getting Android 9 Pie

When does the 3.1 plus get the pie update

Before mid-July definitely, it has been confirmed by Nokia.