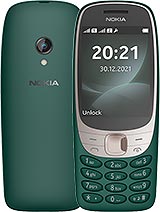 I do not understand why so many people think this is such a bad phone. It is one of the best in the Nokia feature phone lineup. It has a huge screen, great battery life and works fast. I do not understand why so many people need 4G or even 3G. Browsing on this phone is made just for emergency, you are not going to browse much on such a small screen even on 110 and 105 4G anyway, it's just there for people who deliberately need or want to have a "4G" phone. Never is in 105 4G and 110 4G specified they can reach 4G internet speeds anyway especially no browsing since on those phones the screen is even smaller. And the UI is made bigger so some people who may need it can use it, since it's target market is older people, but you can disable the big UI on 105 4G and 110 4G anyway. For 6310 the target market is probably older people, but also for secondary phone to normal people, or just those who want a normal phone, not a smartphone. Camera is fine

I wish I knew of these sooner.
I had avoided buying a cell until summer last year when I finally purchased one because I HAD to have one for a couple reasons. Home phone # wasnt good enough.
Needed SMS.
$400 was actually one of the cheapest I could find of my only available options.
I never use the thing though and it sits on a desk, - and its yet to complete its OS update, - since Ive only let it briefly connect to a connection a couple times.
So this looks like a perfect option for what I needed, - and still do need in a device.
Functionality, Security, and Accessability/Ease of Use.
And because it appears it might be less full of the other junk, - apps, - Id probably end up using it more. Im considering buying one as I type this.

...time to discover more about it and see what I do not know about it yet.

Anonymous, 07 Mar 2022The whole purpose of 2G is no internet or GPS which include... moreOk hol up... thats not what 2g means
Its one of the earliest connection types, u can surf the internet but super slow (max about 80kbps)
And radio has nothing to with 2g

Anonymous, 07 Mar 2022The whole purpose of 2G is no internet or GPS which include... moreYour probably young since you dont know 2G works just fine for internet, im using it right now i use my Ericsson T39 as a Modem for my computer beocuse i am poor, and sure it is Slow, but it Works fine

Saniyasnaini , 10 Apr 2022Why are people at Nokia so inconsiderate these days!? Who m... morefor someone like you who is used to using touchscreen you might not considerate it, but for someone who is old and not into technology this kind of phone will be their kind of tele device.

Why are people at Nokia so inconsiderate these days!? Who makes a phone with this kind of tiny internal memory nowadays?...

I bought two Nokia 6310 handsets. Both are not ringing for incoming calls? Does anyone faced same issue? Any suggestions to fix the issue?

I bought two Nokia 6310 handsets. Both are not ringing for incoming calls? Does anyone faced same issue? Any suggestions to fix the issue?

Does it support boat airdope 148

Hello Does anyone tried using this device for Nokia Suite? Or any contact sync programs in 2022?

Solz, 09 Feb 2022Can it support WhatsApp?The whole purpose of 2G is no internet or GPS which includes no apps, not sure why they put a radio in this or a camera

It doesn't fit the old handsfree kit since it all the wrong size and wrong terminals, stay with the 2001 version

good set but so bad batary

Can it support WhatsApp?

Anonymous, 15 Sep 2021Why this phone is still exist?The world does not revolve around you!

Michael, 16 Jan 2022Does this have a speakerphone?You are just one click away from finding that answer.