Nokia 6 (2018) passes through TENAA, getting closer to release 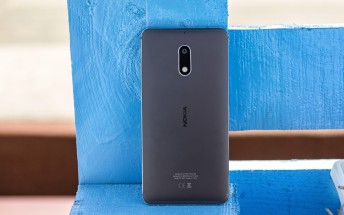 Nokia's first new smartphone to launch in early 2018 may in fact be a new Nokia 6. That makes sense since the original was the first device put out by HMD Global, as it became official this January.

The upcoming Nokia 6 (2018) has been certified by TENAA in China, a mandatory step for any handset that wants to be sold over there. Unfortunately, at this stage in the process TENAA hasn't yet made images and specs available for the new model.

Going by past leaks, however, we should expect to see a 5.5-inch 18:9 touchscreen, the Snapdragon 630 SoC at the helm, 4GB of RAM, 32GB of storage, and a possible dual rear camera setup. The fingerprint sensor will move to the back, which hopefully means the bezels will undergo a trimming. The device will also sport software-rendered Android navigation buttons, while the Bothie feature isn't going anywhere.

The phone's model number is TA-1054, and it will have a dual-SIM version. Its design will apparently be reminiscent of the recently announced Nokia 7. So it looks like 2018 may be the year in which HMD Global finally gets on the 'tall display, small bezels' bandwagon.

Nokia 3 starts getting a new update

Nokia Steel HR now on sale in US

I meant next years nokia 7