Unlike some competing platforms, Symbian handsets have always enjoyed a proper file manager. The File manager aboard the Nokia 701 is a capable app that can basically do anything you want with your files - moving, copying renaming, sorting or sending - you name it. You can also password-protect your memory card if you see fit.

You can also search for a specific file or directory. Type in a part of the desired file name and specify location (phone memory or memory card), the File Manager will find it in no time.

The ZIP manager also comes in handy when you get an archive in the mail or need to send several files easily.

With USB On-The-Go (OTG) enabled on the Nokia 701, you can also use the file manger to access USB flash drives, card readers and even other phones connected over a USB OTG cable (sold separately).

Symbian phones would connect easily in mass storage mode, but other OSes weren't as forthcoming. Still, if you need to grab some files off a thumb drive and you have the cable at hand, USB OTG can be quite useful.

The image gallery app in Nokia 701 is quite the looker. It's been around since Symbian^3, so it's not exactly new but we're glad to be rid of the old one. Photos are displayed in a grid (3 columns) and you can scroll up and down (with kinetic scrolling no less).

You can zoom in by double-tapping or the now standard pinch zoom. Once zoomed in, kinetic scrolling is available and animates smoothly. Switching between portrait and landscape mode is automatic, thanks to the built-in accelerometer.

Selection of multiple photos for deleting or sharing is available right inside the gallery. You can send an image via MMS, email or over Bluetooth and you can share it on your social network (Twitter or Facebook).

Zooming in on a single photo • Sharing a photo

The other features of the gallery include the image tagging system for easier image sorting, the slide show and the albums system (again helping you sort your image database).

Picture browsing is fast, even for 8MP images. There's only the occasional lag and the rest of the time it runs buttery smooth. Noticeably better than the 680MHz Nokias.

Symbian never had trouble with the music player features but looks were far from impressive. With Symbian^3 however Nokia introduced a new Cover Flow-like interface, which adds the much needed eye-candy. For better or worse, Nokia hasn't changed anything since.

There’s automatic sorting by artist, album, genre and the option to create custom playlists straight on the phone. Selecting an artist lists all of their tracks with the album cover art on top along with the covers of other albums in your library.

The music player is unchanged since Symbian^3

Left and right swipes on the album art let you skip to the next/previous song.

Quite naturally, the player can also be minimized to play in background. In this case you can control it via the music player widget on the homescreen, which also displays the currently running track.

You have an equalizer (with presets but no manual settings) along with a Loudness setting and Stereo widening.

The Nokia 701 did well in our traditional audio output test. It's loudness levels are average, but the sound is pretty clear.

When attached to an active external amplifier (i.e. your car stereo or your home audio system) the Nokia 701 does marvelously with no weak points whatsoever.

There is some degradation when we plugged in headphones, but that's to be expected. As usual stereo crosstalk surged and the intermodulation distortion increased as well, but none of them got worse than average. It's no iPhone, but the Nokia 701 is certainly a solid performer and it delivers more than the huge portion of its users will ever need. 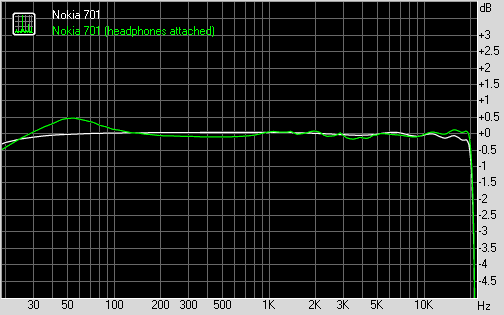 The Nokia 701 comes with a capable video player. It managed all formats we threw at it (MP4, AVI, WMV, even MKV) and videos were silky smooth up to and including 720p resolution.

The media player works in fullscreen landscape mode. The exceptionally bright screen with native 16:9 aspect is also more than welcome for truly enjoying your videos - even in broad daylight.

In fullscreen mode, a tap on the screen shows the controls, which are otherwise hidden.

Watching a video on the 701

The Nokia 701 played large files almost trouble free - a 3GB file crashed only once but ran fine afterwards. There's subtitle support too, but the file has to have the same name as the video file (you can't manually load subtitles) and we ran into problems with subtitle encoding, getting gibberish most of the time.

Yet that's not the biggest problem we had with the video player - while it had no problem with 720p h.264-encoded videos, it chocked on the sound. A quick investigation revealed that the AC3 and DTS codecs aren't supported - a problem since they are the most common codecs save for stereo MP3.

The Video section also includes a few auxiliary apps. One is an editor that lets you create videos and video slideshows. The other apps here include YouTube, CNN Video, E!, National Geographic, and Paramount Pictures Movie Teasers. Of course, each of them requires internet connection (over 3G/3.5G or Wi-Fi) and note that not all content is free.

The FM radio on Nokia 701 comes with neat and simple interface. You can skip preset and new stations alike with sweep gestures or you can use the virtual buttons.

The 701 has RDS support and automatic scanning for an alternative frequency.

Mine also fell and sank to the bottom of a Bucket full of water. The phone struck the rim first and went down in three pieces, the bodJy, battery and cover. All I did was to dry out the phone couple it back. Recently about 4 months after had to repla...