HMD officially sent out invites for a September 22 event that promises new Nokia phones and a special guest. The event will be live streamed on YouTube, however the cast of phones starring in the show is kept under wraps. One leakster has some ideas, however. 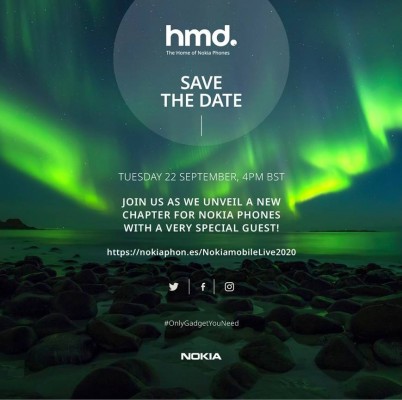 They claim that the Nokia 7.3 will get top billing at the event and that it’s unlikely that the flagship Nokia 9.3 will launch alongside it (instead, it will arrive by the end of the year).

As proof of those claims, the leakster points out that the Nokia 7.2 (which was announced last September) is being discontinued.

Indeed, the Nokia online stores in Germany, France, Spain, Finland, India and other countries say that the product is no longer available. It is available in the UK (of course, that may change in a day or two). And you can still find it at third-party retailers.

The Nokia 9.3 PureView, which has faced numerous delays, is still not ready to launch. Recent rumors claims that it hasn’t even gone into mass production yet, something that is expected to happen this month or in October. So at best we may see a teaser for it at the 7.3 event.

Nokia 9.3 and Nokia 7.3 to launch in August or September, rumor says

Nokia 7.3 prototypes tested with new quad camera design, may get a 64MP sensor

I am totally corrupted! Bad sector! Info like HW has Lecia camera, OLED doesn't have burn in, Instagram style photo is nice, No human right is right.... cannot be written to my HD! haha.... maybe i need re-education!

my friend is a typical, "i got nothing to hide" type of character... so he will never learn. but lucky that was his 2nd phone as his LG android phone was completely useless in China anyway, as his email/maps/IM etc was all blocked anyway. H...