Quite frankly, we almost lost count of the number of times we've seen leaked images and videos of it in the past four months. It all began back in June, when Mr. Elop himself accidentally (or not) showed it in front of a select crowd, and on, and on it went. Today, we continue the rumor cycle with leaked press shots of the Windows Phone running, Nokia 800. 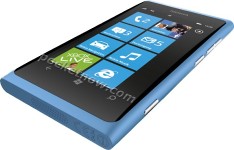 As you can see above, the upcoming Windows Mango handset, which we came to know as Sea Ray, is an almost identical twin to the great looking Nokia N9. It even comes in the same color scheme as its MeeGo running cousin.

With stunning looks and a fresh Windows Phone OS on board, we cannot wait to see how the Finnish creation will fare against the Android and iOS heavyweights. The smartphone is expected to be officially launched next week (likely with a couple of other models) at Nokia World in London.

Can someone let me know the approx price of this phone?

...I don't like the look of this whole "Nokia Music" thing. Zune Music player is one of the main reasons that I'm gonna get a Mango device. Why does Nokia ALWAYS mess up when they've got a good thing going on?

What is the cam in this smart do you know