Nokia 8800 series of luxury phones have always focused on high quality materials and superior build quality, while holding back on the spec sheet. With the Nokia 8800 Erdos this reputation is about to change.

First off, "Erdos" is just a code name so expect that to change at some point. And second - this won't be an Arte. The Arte phones have had largely the same design, differing in materials only. The 8800 Erdos changes not only the design but also the way the phones are built.

The screen of the Erdos however is covered with regular scratch-proof glass, rather than sapphire, which is the usual weapon of choice in such cases. The glass covering the screen though turns silver when the display is off, giving the impression that the phone is a single slab of stainless steel. The screen itself is an OLED unit with QVGA resolution and a diagonal of 2.4 inches. 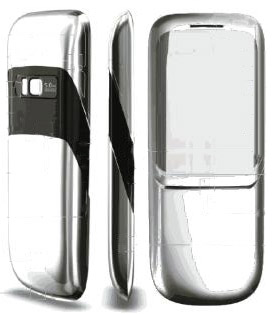 The high-end design of the Nokia 8800 Erdos includes a rather unique feature too - it's a slider like the rest of its siblings, but the keypad raises to the level of the display when you slide it out. This should make the keys of the top row much more accessible.

Sounds good already, but we haven't even gotten to the good part yet - the Nokia 8800 Erdos is the first of its breed to be a full-on smartphone. It'll run the Symbian OS S60 and feature Wi-Fi and A-GPS. The internal memory is 8GB, though there's no card slot.

The camera is the best in the luxury class with its 5 megapixels and Carl Zeiss lens with autofocus. There's a dual-LED flash too.

Rounding off the specs is the reasonably compact size of the phone. The 8800 Erdos measures 116.9 x 50,3 x 15.0 mm, though its weight is kept on the hush-hush. There is also a dedicated noise reduction microphone on the back.

The Nokia 8800 Erdos will be available in October with tri-band GSM (900/1800/1900) and dual-band 3G/HSPA. The price is the other thing missing from the rumored specs, though this could easily top the price point of the Gold Arte.

Oh, and here's a video to give you a better impression of the design:

The Chinese Already Made This Phone Into Market , Calling It Nokia 8820 -.- , I Don't Think Nokia Will Release This Phone.

I've read so many different comments about this phone. It sounds and looks great but I can't tell if it's even supposed to come out! Can anyone say for certain that they know whether or not this phone is a go and that it may be coming out later in th...