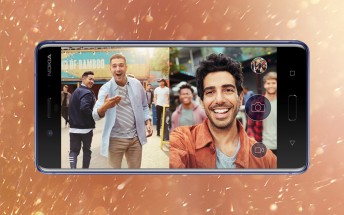 We took some camera samples with the Nokia 8, but the famous British weather did not want to cooperate. The first photo below is from Wednesday evening, right after the event ended. The others are from Thursday on a fairly overcast day. We'll leave image quality discussions for later, but we have some thoughts to share about the camera.

First, the camera actually takes two photos (one with each camera), but both are in color. You can pick which one you want to keep (or you can disable this option if you wish).

We tried the Dual Sight option too. The image quality of the selfie camera seems stellar, but we found it strange that the resulting image is 8MP. How do you combine the photos from two 13MP cameras and end up with 8MP?

Plus, since you have to take both shots simultaneously, framing is tricky. It would have been easier if it had the option to take the photo in two steps (as other camera apps have done in the past).

What do you mean they're called #bothies?

The Nokia 8 can produce black & white photos too. Here's how they stack up against their color counterparts.

Finally, here are several 4K 2160p video samples we took. Keep in mind that the color sensor of the rear camera has optical image stabilization. Also, the Nokia 8 boasts three mics with special audio recording algorithms from OZO... but we think they could have done something to reduce wind noise.

Don't forget to check our hands-on for more on the Nokia 8!

Nokia has a big event today, here's what to expect

i couldn't own the 808PV in time, i regret that till today. Look the weather in these pics, 808 is the only phone which can capture crispy clear pics even in those conditions, Nokia 8 did pretty well, but the small sensor size just can't take it al...

same weather condition, try out any other f2.0 phone, no one else could produce the amount of detail Nokia 8 managed to put in this dull weather.