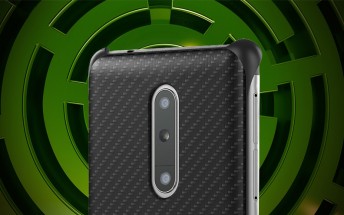 8GB of RAM? Or 4GB? How much RAM does the Nokia 9 have? AnTuTu profile points to 4GB and along the way give us a glimpse at some other specs of what could be a $700/€750 flagship.

The Snapdragon 835 chipset is a certainty at this point, but the benchmark confirms the other rumored specs - a QHD screen for one. Allegedly, it will have a 5.3” diagonal, making is smaller (but sharper) than the Nokia 6 screen. 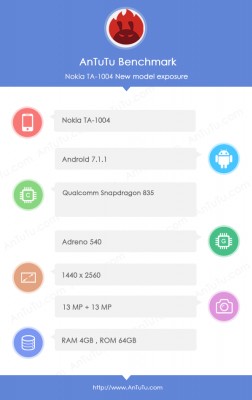 Nokia 9 specs (according to AnTuTu)

The camera setup is indicated as 13MP main (a dual camera) and a 13MP selfie. Video resolution info is missing, but we’d be very surprised if the Nokia 9 doesn’t do 4K 2160p. The Nokia 9 will be unveiled sometime between July and September. We'll have to wait and see if Nokia releases a localized version with more RAM, like Samsung did.

HMD confirms Nokia 6, 5 and 3 will get Android O

Nokia 9 with a whopping 8GB of RAM spotted on Geekbench

Nokia 9 appears on GeekBench again, this time with 4GB of RAM

The best version always goes to China.. For example Samsung S8 with 8GB/128GB and Nokia 6 with 4GB/64GB.. Now this Nokia 9 with 8GB and probably 128GB too whereas the rest of the world gets 4GB/32GB

By who? If you're talking about the award they won at MWC that's just one event lol

A localized version? Meaning it's not going to be available globally?