The penta camera-toting Nokia 9 PureView has received a new software update that brings in tons of improvements.

This update, bearing version number V4.22C, weighs 250.4MB in size. Its changelog mentions improved system stability, UI enhancements, and April 2019 security patch. However, users report that this update has much more than that. 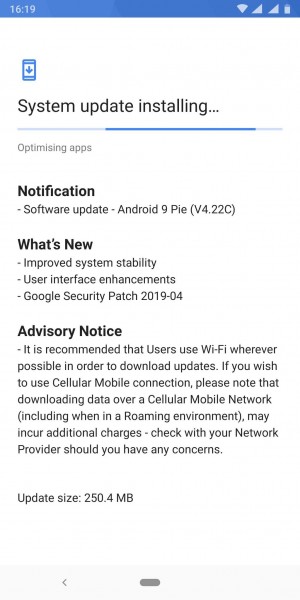 The new firmware has improved the performance of the phone's in-display fingerprint scanner, but if you don't see any improvements, just try to enroll your fingerprint again and see if it works.

Other enhancements that come along with this build are faster face unlock, accurate screen colors, and better skin tones. The camera takes better photos now, but the image processing speed is still unimpressive.

This update is rolling out over-the-air. If you have received it already and noticed anything that's not mentioned above, drop us a comment below.

HMD is working on fixes for the Nokia 9 PureView camera, in-display FP reader

Yes can agree no more with your saying. It is not the original Nokia even though they own and rebrand it. I have my Nokia as early as the 8110s and th last is pureview808. They were perfectly built with endurability and a best balance of...

Not demanding but we want bug free software experience and that we deserve it.They gave us Pie the skinned version of Oreo.The pie has full of bugs and not even acknowledging the issue and we've been asking for camera improvement after they released ...

your to demanding thank them for getting the update possible unlike other phone that ranges $850 to thousand $$$ phones that don't even care about even security update hard to see. are you a programmer?if not you don't anything your just a (.1%) brai...