Nokia Lumia 510 review: Down a gear

The Pictures hub change nothing since the Mango update. You can set a single photo as a background for the hub (it used to be the last photo viewed) or you can set it to shuffle different photos.

The main view of the Pictures hub offers four options - camera roll, albums, date and people. A swipe to the left reveals what's new, which displays your Facebook friends and liked pages' new picture galleries. Another swipe shows your favorites section, where the photos you've faved are displayed.

Windows Phone 7 used to be quite restricted when it came to sharing - it's still not perfect but you can now share pictures and videos too. Sharing options include messaging, email, Facebook, Twitter, the cloud-based SkyDrive or via Bluetooth Share. The long-awaited Bluetooth transfers are here and you can send multimedia content to another device easy and hassle-free.

While uploading photos to Facebook, the OS will detect any untagged faces and allow you to tag them before proceeding with the upload.

The video player doesn't recognize .AVI files - in other words, don't expect DivX or XviD support. However, the Zune software on your computer will automatically convert such files to .MP4 - so, you can watch those formats on the Lumia 510, it's just that the transfer to the device can take quite a while (depending on your computer's capabilities).

It's interesting (and useful) that you can pin individual items to the homescreen - like a song or video, even an FM radio frequency.

Music + Videos is where the fun happens

The music has a simple and straightforward interface. You won't have any difficulties using it. However there are some things missing, like an equalizer. Another missing feature is the ability to scrub through a song with your finger - you have to press and hold on the FF/rewind buttons to simply jump back and forth.

You have the current frequency in very large digits - swiping left and right changes the frequency and a swipe and release automatically searches for the next available station in that direction. You can mark some stations as favorites, which will allow you to pin them to the homescreen. RDS is on board and you can switch between headphones and loudspeaker.

If you have the Zune Music Pass you can stream or even download almost any song that is in the Marketplace. It applies for all Microsoft devices - Windows RT, Windows 8, Windows Phone 7.8, Windows Phone 8 and Xbox 360.

The Lumia 510 comes with pre-installed TuneIn Radio app which allows you to stream countless of worldwide radio stations to your phone. It has an intuitive interface and can search for local stations by your current location.

Unfortunately the Nokia Lumia 510 didn't quite manage to ace our audio output test. The smartphone posted below average results in both tested scenarios and fell significantly short of the Lumia 610 performance.

The frequency response had its extreme bass frequencies cut off with both headphones and an active external equalizer, but was spot on for the rest of the range. The signal-to-noise and dynamic range readings were only average on both occasions, though.

The total harmonic distortion was good with no headphones attached, but worsened quite a lot when we plugged them in, while the intermodulation distortion was rather case in both cases. Stereo crosstalk started off as average, but dropped to below average with a pair of headphones, rounding up an uninspiring overall performance.

And here comes the table so you can see for yourself. 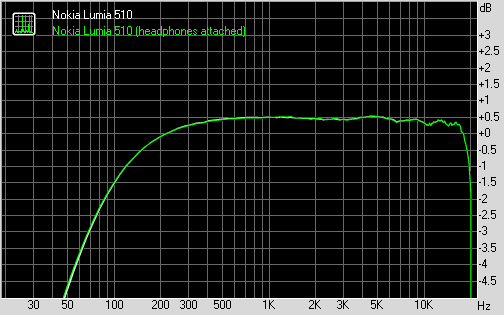 I want to restart

I love my phone Nokia lumia 510 I request to have my WhatsApp to be renew to enable me chat with friends, thank you.