The main view of the Pictures hub offers four options - camera roll, albums, date and people. A swipe to the left reveals what's new, which displays your Facebook friends and liked pages' new picture galleries. Another swipe shows your favorites section, where the photos you've faved are displayed.

The video player doesn’t recognize .AVI files – in other words, don’t expect DivX or XviD support. However, the Zune software on your computer will automatically convert such files to .MP4 – so, you can watch those formats on the Lumia 800, it’s just that the transfer to the device can take quite a while (depending on your computer's capabilities).

Music + Videos and Nokia Music too

Nokia Music works as a general music player but with a location-aware twist. You also get access to the Nokia Music store, which is an alternative to the Zune Marketplace.

As a music player, it's pretty standard - your tracks are sorted by artist, album, playlists or you can view all songs. The interface is very similar to that of the stock music player, but under the album art it lists the next three songs to be played - really helpful if you're using shuffle. There's no way to manually reorder the upcoming songs, but you can reshuffle them if there's one you don’t like.

The location-aware feature is called Gigs - as the name suggests, it finds concerts near your location.

Gigs looks for concerts nearby

Audio quality is a mixed bag

Recent Nokia smartphones tend to offer pretty good sonic experience and it appears that the Nokia Lumia 800 will be no exception to the rule.

The Lumia 800 exhibited decent loudness and reasonably clean output when connected to an active external loudspeaker. Its scores were excellent for the most part, except for the distortion levels, which were higher than average.

Unfortunately, we are currently having some issues with our audio testing equipment that concern the headphones on part of our usual test. That's why we won't be posting the Nokia Lumia 800 scores with a pair of headphones attached, until we've fully resolved them.

Update 06 Dec: We were finally able to complete the second part of our test, but unfortunately the Nokia Lumia 800 didn't exactly pass it with flying colors. With headphones plugged in the smartphone dramatically changed its frequency response, cutting-off the bass frequencies, while its stereo crosstalk and intermodulation distortion spiked. Quite unconvincing performance for a flagship device. 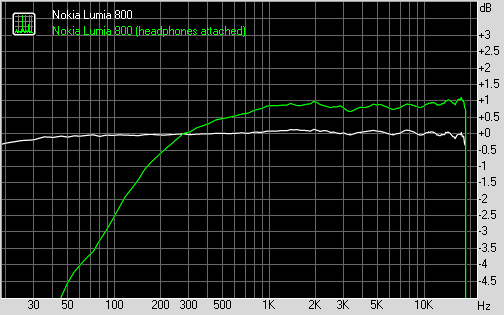 I can't believe you are still using this phone to this day. I loved it so much!!! I respect you for that.

I can't connect to wifi