The Nokia N8 is an immensely popular phone and we’re already hard at work on a proper review of the handset. Since the N8 camera is its pivotal feature, we’re interested how you'd rate it in a blind shootout with two other cameras - the Samsung Pixon12 and the Sony DSC-HX5v compact digicam.

Our comments section is full of your input about the Nokia N8 camera performance. Our latest article on the subject got more than 1000 comments in a couple of days.

The way we see it, there’s some strong brand awareness that surrounds the Nokia N8. One way or the other, both praises and criticism come down to the handset being a Nokia phone.

The N8 advertising campaign has set the bar of expectations quite high. It’s only natural that when you boldly brag about the qualities of your product, you will attract all the scrutiny in the world.

As a result, we see a lot of prejudice about the N8 camera performance. Another prejudice we see often is that cameraphones will never be as good as dedicated digital point-and-shoot cameras.

So striking at both of these, we’re putting the Nokia N8 against both a capable cameraphone (the Samsung Pixon12) and a relatively expensive point-and-shoot digicam (the Sony DSC-HX5v Cyber-shot). And best of all, we’ll start with a blind test. 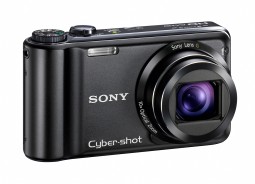 We’ll give you camera samples from all the three cameras in random order. You are free to pick your favorite today – call it in our comments section. We’ll announce the true identities of the devices behind the photos tomorrow.

Since the Sony HX5v is a 10 megapixel camera, we’ve downsized all images to 10 megapixels just for this test. Don’t worry, it’s for demonstration purposes only. That kind of comparison is really alright and it doesn’t put the 12 megapixel shooters in a disadvantageous position. Just on the contrary – the downsizing would even help them by concealing some of the digital noise.

The sample images you see have been stripped of all EXIF data, but we haven’t done any other digital modifications to them (besides the obvious resizing). You’ll see the original full-resolution samples tomorrow so you’ll be able to verify that for yourselves.

Once again, this is not a guess-the-phone game. It's about picking the best camera regardless of brand loyalty.

And here's where it gets tense. As light levels fall, the cameras increase their ISO potentially leading to either increased digital noise or smudgy noise suppression.

Tomorrow we’ll also publish our first preview of Nokia N8. It won’t be the full-blown, detailed thing you’re used to but a shorter version. We’ll release the full-length article once we get through the streak of bad weather we’ve been having for a while. Cameraphones are best judged on a sunny day when they are at their greatest. And the Nokia N8 is a fine shooter that deserves the effort.

It's original beach! The N8 is unstoppable

In timing, innovation of technology is not matter of jok. As long as i used Nokia n8, it's one of the best