Nokia N9 review: Once in a lifetime

Once in a lifetime

Image gallery is simple, but cool

The Nokia N9 image gallery follows the general design guidelines and is a pretty simple affair. You get a scrollable list of thumbnails (15 per page), which you can tap to bring to fullscreen.

There's some filtering as well - the gallery can show the images captured with your N9 camera, the preloaded ones, favorites, videos or all at once. Filtering by tags works as well and has a pretty cool automatically generated tag-cloud.

Pinch-zooming and swipe browsing, plus kinetic scrolling are part of the standard equipment of any modern day smartphone so they won't be bringing the N9 any bonus points.

When you are looking at a single image or video you get shortcuts for marking it as favorite, sharing it or deleting it. There're also extra options like slide show, edit mode, set as wallpaper, set as avatar, etc.

All kinds of sharing options are available

Of course you could use the gallery to play your videos, but the Nokia N9 also comes with a dedicated video player, which does a better job of it.

Your videos' thumbnails get listed in another vertically scrollable list and if you press and hold one of those thumbnails you're offered the chance to view the details of the video. Those include its format, length, size and the number of times you have watched it, plus the last time you have played it.

The video player also does an automatic lookup of the video on YouTube and gives you the related videos suggestions on that same details page.

The video player offers sharing of your videos, in much the same ways as the image gallery. It will even compress the videos for you.

The rich codec support includes DivX and Xvid and we found that videos up to 720p resolution generally play good with the Nokia N9 hardware. And we must note that they look damn fine on that ample AMOLED.

It's no Galaxy S II, but the Nokia N9 still makes for a great portable video player. And we were very pleased to find out that it's battery's fit for the task, too. The MeeGo smartphone did 8 hours and 40 minutes on a single charge in our dedicated video playback test, before its battery went from 100% to 10%.

The final bit of the Nokia N9 multimedia package is the nicely looking music player. Its main screen holds album art thumbnails at the top and filtering categories (artists, albums and playlists) at the bottom.

A really nice touch is that Nokia N9 automatically generates images for those of your albums that don't already have album art (such as those you’ve ripped yourself). Those are actually looking pretty cool, considering that they are machine-designed and save you the need to look at ugly identical templates.

When you have a track playing in background its album thumbnail zooms in on the music player main screen. Much like the video player, the N9 music player keeps track of how many times you have played each song and when was the last time you listened to it. Automatic suggestions for you are fetched from the Ovi Music store, as well.

Taking a look at the music player

Unfortunately, the Nokia N9 music player offers no equalizers, or repeat of a single song. There's regular repeat and shuffle though and you can mark tracks as favorite. That way they will appear in the automatically generated favorites playlist, which as we said, can be accessed from the main screen of the music player.

After such an impressive multimedia performance it would have been a shame if the Nokia N9 audio quality wasn't great, but luckily that's not the case. The smartphone did pretty well in our test, combining some pretty great scores with high volume levels.

When attached to an active external amplifier (i.e. your car stereo or your home audio system) the Nokia N9 does really well, with the average intermodulation distortion reading being the only exception.

Naturally, there was some quality deterioration when we plugged in the headphones. The stereo crosstalk dropped to just above average levels and the intermodulation distortion climbed even further, but the overall performance remained pretty good and the volume levels were among the higher we have seen, too. 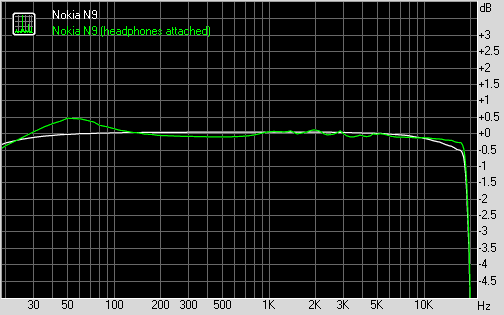 You can't download it because whats app doesn't support its small screen.Facebook and yout be will surely work. You can use Nokia messages.

Think you should update the software if available or should do factory reset.