If you recall, back in October this year, Motorola announced the Nougat update for its Moto G4 and G4 Plus smartphones as well as posted release notes for the update on its India website, leading us to believe that the roll out has begun. That, however, was not the case.

Now, nearly a couple of months later, the update has finally started rolling out. Even a Motorola rep confirmed (third screenshot below) that this is the official roll out. 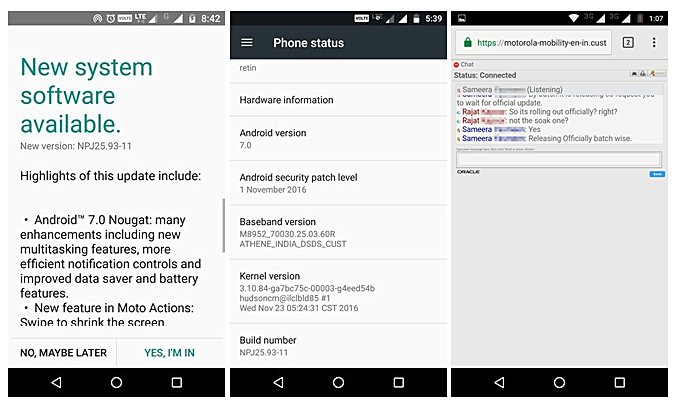 The update is currently hitting units in India. Arriving as version NPJ25.93-11, it brings along Android version 7.0 and also bumps the security level to November 1. The update is being rolled out in batches, so it may take time before your device gets it.

Nougat version is really a SHIT for Moto G4plus, Battery drains very fast, need to charge phone twice a day, however earlier it was lasting for 1.5 day. All Apps, and videos hangs up too. PLEASE DONT UPGRADE TO NOUGAT. Ankush Gupta

never Upgrade this phone to Nougat Mobile so much hang , Battery Drain so Fast , all apps are hang, video play hang, File delete hang SAY NO to UPGRADE