A Nougat-powered LG phone has been spotted on the Geekbench benchmarking website. A quick look at the device's model number - LG-K530 - reveals it's the Stylo 2 Plus. 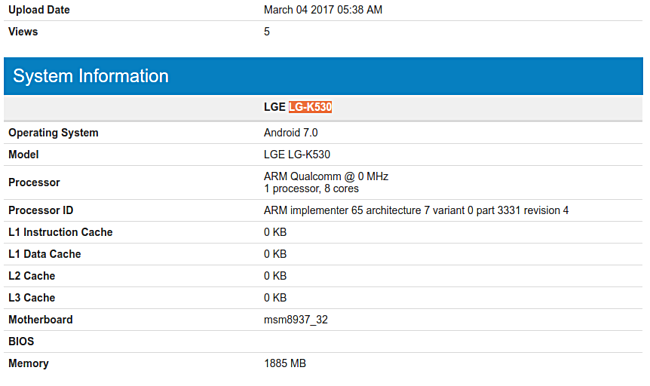 Over a week ago, T-Mobile updated its website to reflect that it has started pushing out the Nougat update to LG Stylo 2 Plus units on its network. But turned out that wasn't the case as the carrier later removed all references to Android 7.0 Nougat from the Stylo 2 Plus software update page.

The new Geekbench listing, however, suggests that the Nougat update for the device is under testing, and should be available sooner than later.

LG Stylo 2 Plus on T-Mobile starts getting Nougat update

The LG G6 wallpapers: the story behind their making

LG working with Valve on a desktop-focused VR headset

You would care if it only had one.

at least all around saying this, i see in XDA, a user in Korea talk with LG Support and they told him the update is unstable and then no Nougat for V10 or G4, and i think is a lie, SD808 is the same in Moto X Force and Nexus 5X and those devices alre...

What?are you serious?no nougat for V10??!! You should be kidding:(((( The best phone I've ever owned V10 and have been waiting for update for a couple of months!! What a frustration..!!