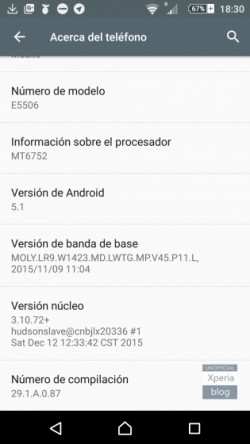 Just two days ago Sony surprised us by releasing the update to Android 5.1 Lollipop for the Xperia C4 smartphone. This was unexpected because previously the Japanese company said this device would jump from Android 5.0 straight to Android 6.0 Marshmallow, with no 5.1 update planned in between.

And today it's time for a new handset to get the exact same treatment. According to Sony, the Xperia C5 Ultra was also supposed to go directly to Marshmallow. Yet an update to Android 5.1 for it is now rolling out nevertheless.

In this case the new release is being sent to all the variants of the C5 Ultra, regardless of where they've been sold. When it comes to model numbers, that's the single-SIM E5553 and E5506, as well as the dual-SIM E5533 and E5563.

Obviously though, as this is a staged rollout, you could need to wait a few days before it hits every device out there. If you own the single-SIM Xperia C5 Ultra, then after applying the update you will be on build number 29.1.A.0.87, while for the C5 Ultra Dual it's 29.1.B.0.87.

Hopefully the release of these Android 5.1 updates won't delay the upcoming rollout of Android 6.0 Marshmallow for these phones.

When i tap for call sim1 or sim sometimes it takes times pop up the call processor please fix it.

i have been using sony xperia c5 last 7months i dnt find any pbroblem with this .sound clarity good battery good finaly everything is awesome