The smartphone adoption in the US market is growing and two companies are coming out the big winners out of it – Apple and Samsung together hold over 60% of the market in the last quarter of last year, up from 52% in the final quarter of 2012. 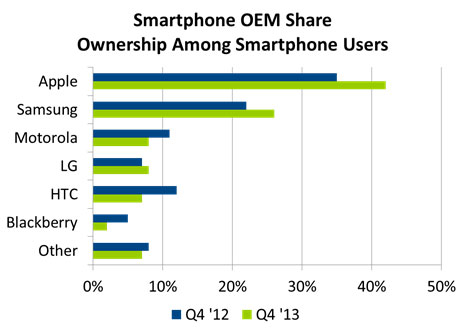 LG saw a small increase in its share but still controls under 10% of the market. The NPD Group, which prepared the market share report, doesn’t go into details of how much this is due to the company's Nexus involvement (LG build both the Nexus 4 and 5).

While the Google-branded Nexus may have helped LG, the Google ownership of Motorola did not and the company went from over 10% market share to about equal with LG. All other companies declined.

HTC experienced a sharp drop in a year, though not as sharp as BlackBerry, which got its share almost completely evaporated. Even the makers collectively market as "Other" in the report have declined, which points to a homogenization of the market – Apple in front, with Samsung as a distant second.

What US users do with all those smartphones is use more and more data apparently. The average data usage per month went up to 6.6GB (from 5.5GB in Q4 2012). Half of smartphone owners now use some form of music streaming (up from around 40%).

Pandora was the most popular streaming service, with iHeart Radio coming in second. With growing adoption, it's no surprise that more and more companies are trying to get into the streaming market, like Beats Music.

not surprised at all with apple's dominance in the us market,americans are petroitic and beleive in pushing one of their own first. apple must not relax though because i believe in the next year or two years samsung will equal or pass apple.my predi...

In my home country south africa they do have sony phones! And its advertised more than LG! What do you reckon?