NSA is able to install spyware on all iPhones

A leaked NSA document proves that the agency is capable of easily deploying spyware on all iPhones and can have access to user data including SMS messages, contacts, and even a user's location by utilizing cell tower information. What's even scarier is that the NSA can remotely access an iPhone's camera and microphone that is infected with the spyware.

According to the leaked intel, the initiative, named DROPOUT JEEP, began in October of 2008. The document delineates that the NSA would need physical access to the device in order to install the software, which doesn't sound too bad. 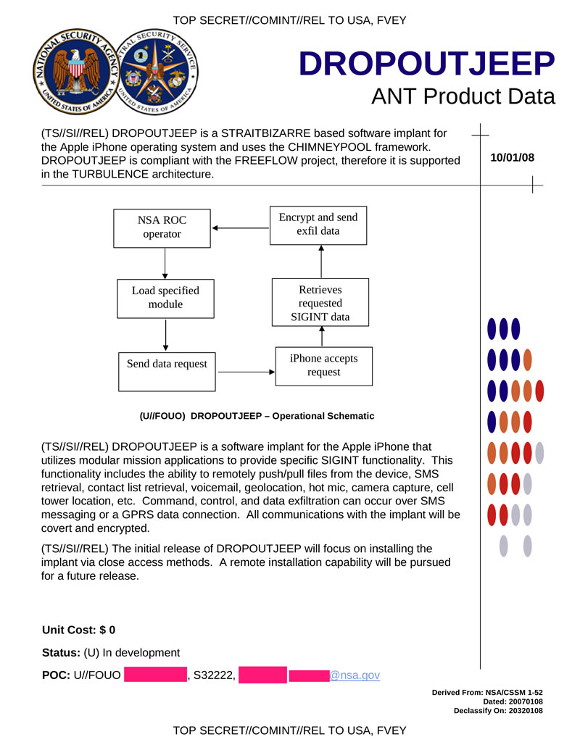 However, the German Magazine, Der Spiegel, which also published the DROPOUT JEEP data, believes that the NSA rerouted shipments of brand new iPhones before they went out to consumers to install the spyware. Even worse, there was some speculation a while back from Edward Snowden, that suggests Apple may have allowed the NSA access to their products. The news was reported by Jacob Applebaum, who has a more detailed lecture (that he gave yesterday) about DROPOUT JEEP and the state of cell phone spyware today. You can watch it here.

It's harrowing enough to think that the NSA is infecting iPhones without Apple's knowledge. It's even more harrowing if Apple is helping the US government to spy on its customers. We will provide more info on this story as it develops.

I wonder how many agents they need to monitor(spy) on 7 billion people, can i apply for the job ? :D

If NSA can install spyware on iPhones, they can also install the same on Android and Windows. If you're concerned about your privacy, just buy a BlackBerry or an old Symbian phone.