Some of us found last year's Red Magic 3 and 3s design quite refreshing. In the sea of fragile glass sandwich smartphones, the Red Magic lineup offered a more durable aluminum unibody chassis. But this time around, nubia went along with the current design trends by introducing a glass design. The company doesn't disclose what version of Gorilla Glass has been used for the front, but the back seems to be a standard glass sheet while the sides are made of aluminum with a finish that feels something between gloss and matte. The Black version we have here feels like a perfect blend between a more minimalist, elegant appearance and the usual aggressive gaming looks. We haven't seen the gradient version called Cyber Neon nor the Red model, but we feel they would be more appealing to the gamer's crowd. 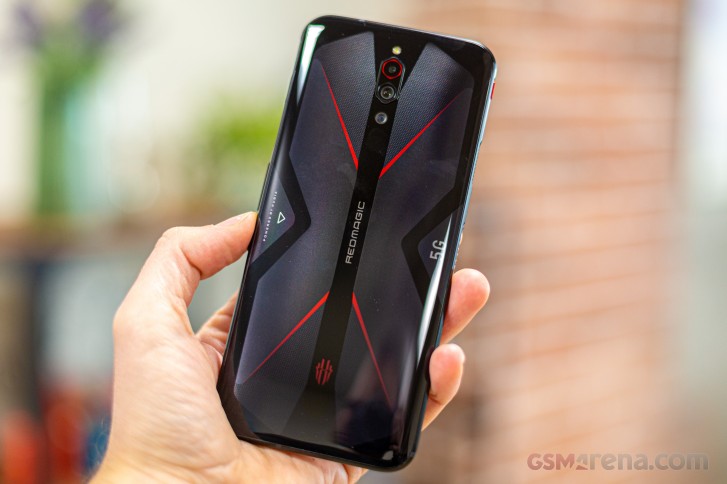 You still get the LED-illuminated RGB elements on the back, though. The "Redmagic" inscription along with the logo near the bottom. The red stripes don't have backlighting so the RGB LED show this year is rather modest. 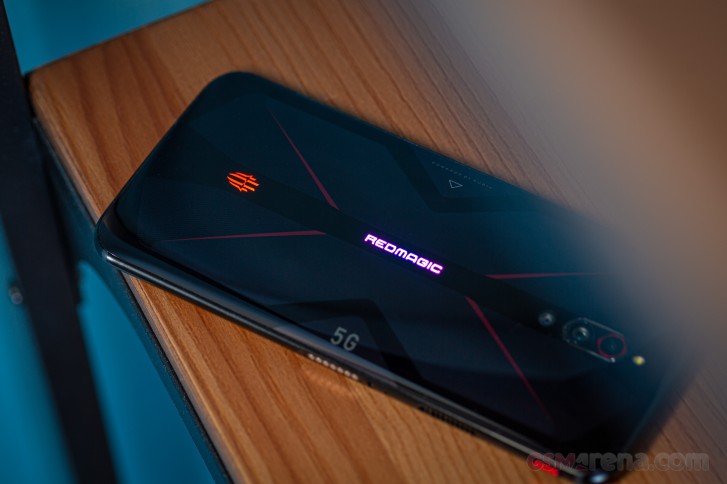 In terms of ergonomics, the back glass is curved from the center to the sides seamlessly transitioning to the side frame. We found the curvature particularly pleasing and gives you the notion of a well-built chassis. The camera module is the only thing sticking out, but the protrusion is really subtle. You can almost say it lies flush with the back glass panel. The module, however, is home to the main 64MP camera, the 2MP macro lens while the ultra-wide unit sits behind the glass panel away from the module. 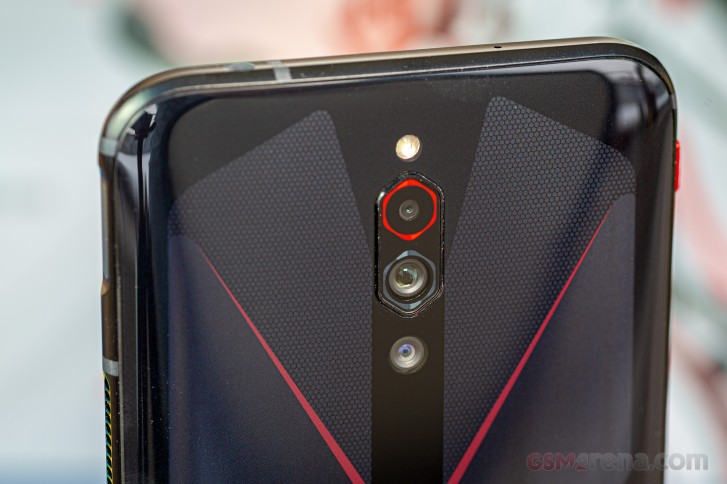 The side frame is just as nice as the back. It has chamfered edges all around, making the transition between the front and back glass panels without gaps or protrusions. The smooth feel of the anodized aluminum is also something we appreciate, but it's not optimal for a secure grip. 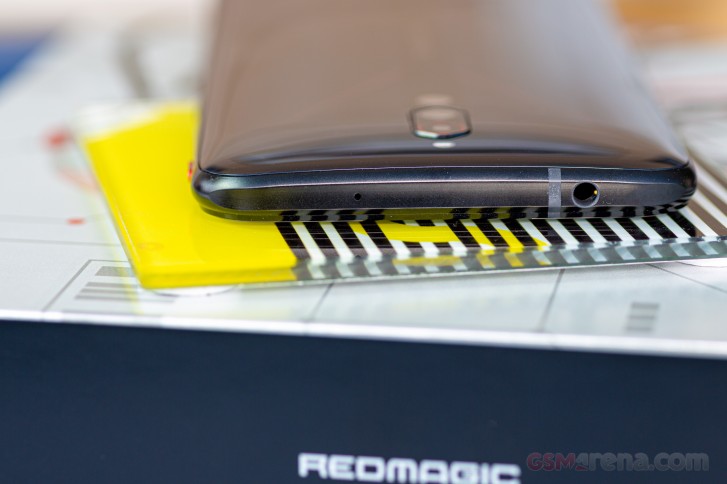 On the left side, you will find a 7-pin connector for the nubia gaming accessories, the intake fan grille, and the physical switch for the gaming mode. The volume rocker and the power button are placed on the right sitting right between the shoulder triggers and the exhaust vent for the cooling fan. The buttons feel nice and clicky with a barely detectable wobble. Unfortunately, though, we find the positioning of the power button sub-optimal. The thumb rests right on the volume rocker, and we often found ourselves pressing the volume up button instead of the power key. Luckily, you won't be using the power button nearly as much due to the in-display fingerprint scanner and the wake-up gestures. We will talk about that more in the software page. 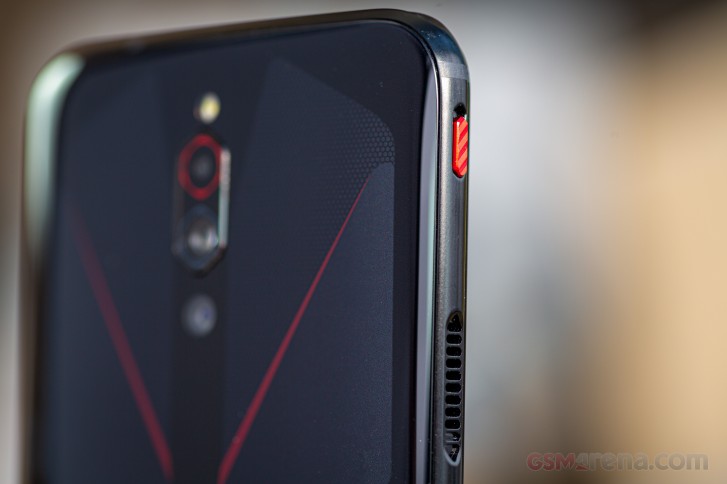 The bottom side is slightly concave and houses the SIM card tray, the USB-C connector, and one of the loudspeakers. Interestingly, the top is where the audio jack is located. It's rather unusual these days to see a 3.5mm audio jack, let alone on the top of the frame. Still, kudos for including it. 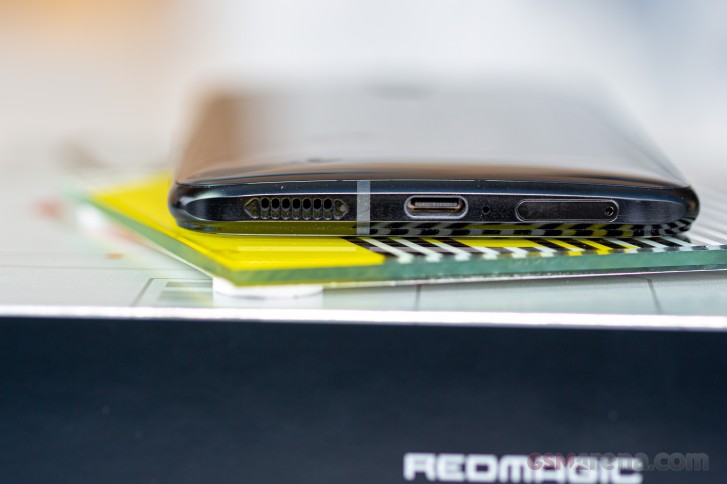 And as for the front, it's refreshing to see the display without any cutouts or holes. Sure, the top and bottom bezels are a bit on the thick side but for a reason. For instance, you still need some room for the front-facing camera, the accompanying sensors, and the earpiece. And more importantly, the thicker bezels will ensure a more comfortable grip when playing games in landscape. The side bezels are thin enough, though. 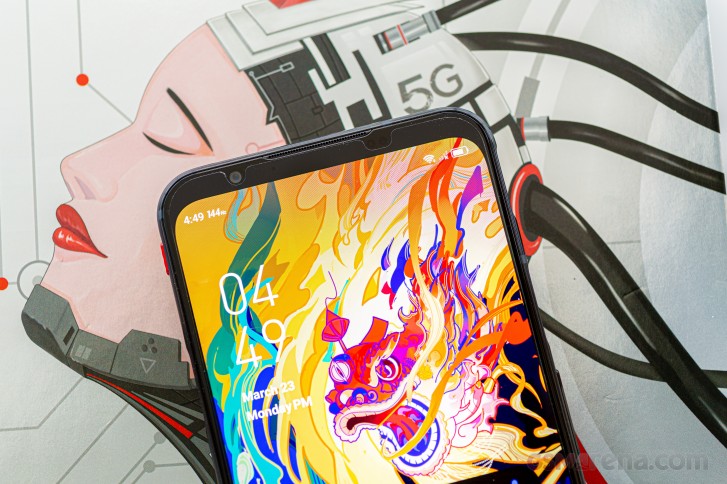 All in all, we really liked the design of the handset. Aside from the fact that it's slippery (like all glass phones), fingerprints and smudges are hard to notice, and the build feels solid. Our only real complaint is the power button placement and the uneven distribution of the weight. It feels top-heavy, and it's hard not to notice with the device weighing 218 grams. Then again, that's the cost of having so many hardware features like shoulder triggers, heavy-duty active cooling design, and a huge 4,500 mAh battery.

What is pogo pins??

Does this Phone available to Phillippine😢