Nubia went for a really squared-off silhouette for the Red Magic 8 Pro. Gone are the softer and rounder edges of its predecessor. Instead, the 8 Pro looks almost "box-like". That, however, is far from an insult since its appearance is still quite modern, and it manages to pull off the "gamer" aesthetic quite well. 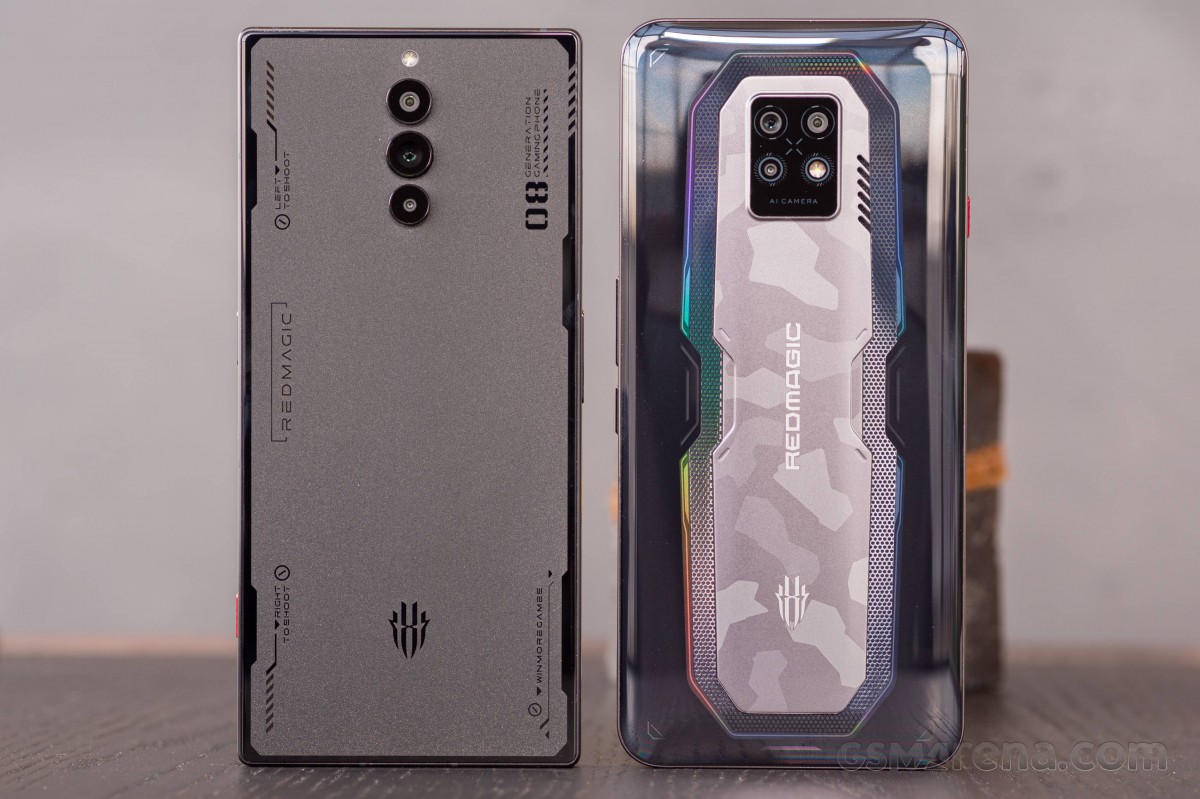 Let's start with the back of the phone first. As we said, the Red Magic 8 Pro+ is available in the so-called "void" color scheme, with a mostly transparent back side. However, our regular 8 Pro unit only comes with a Matte back. It feels silky smooth to the touch and doesn't retain too much grease and fingerprints, which is a plus. 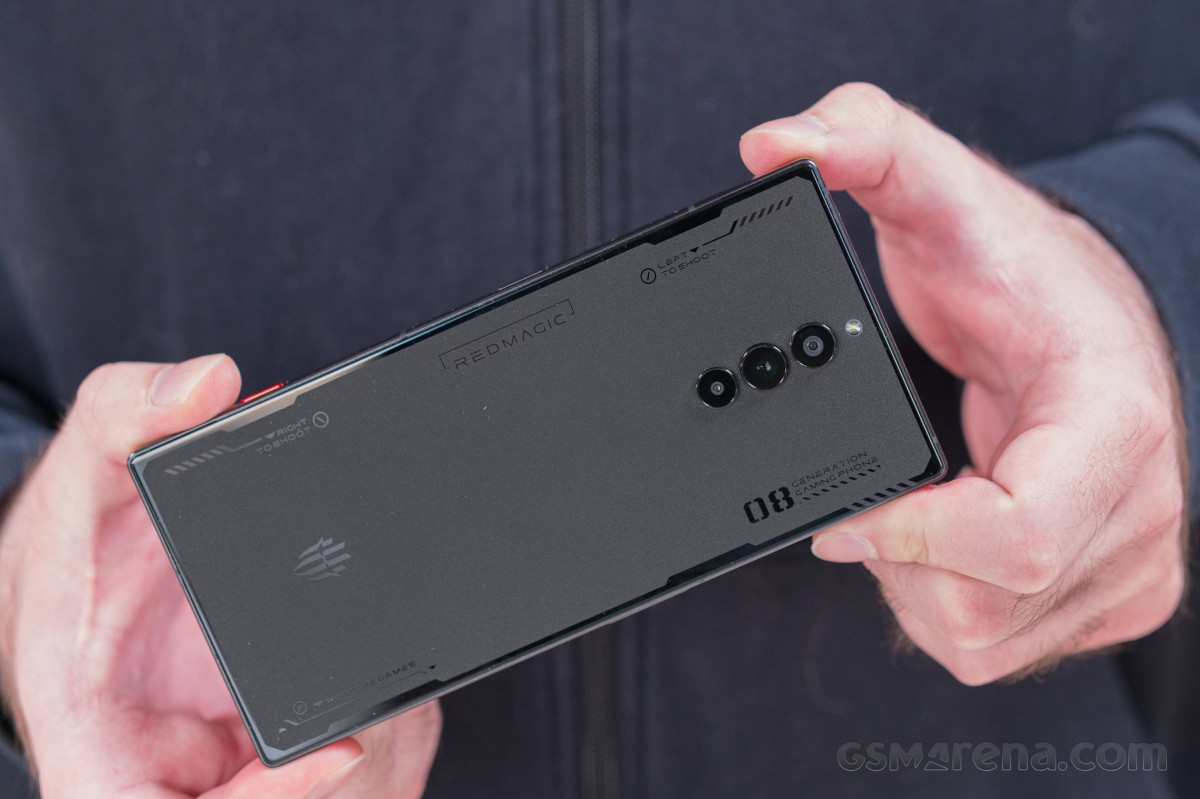 There are plenty of "gamer-y" graphics a text scattered all over the backside. These look and feel embossed on top of the surface. Nubia calls them "Inlaid Holographic Textures", which sounds like a good description.

The Red Magic 8 Pro lacks RGB lighting around its fan. You can't even see the internal fan like you can on the transparent Pro+.

Still, the phone has some RGB lights. The REDMAGIC text and the labels beneath the two capacitive shoulder buttons are illuminated. Nubia calls this "RGB Band Lighting". 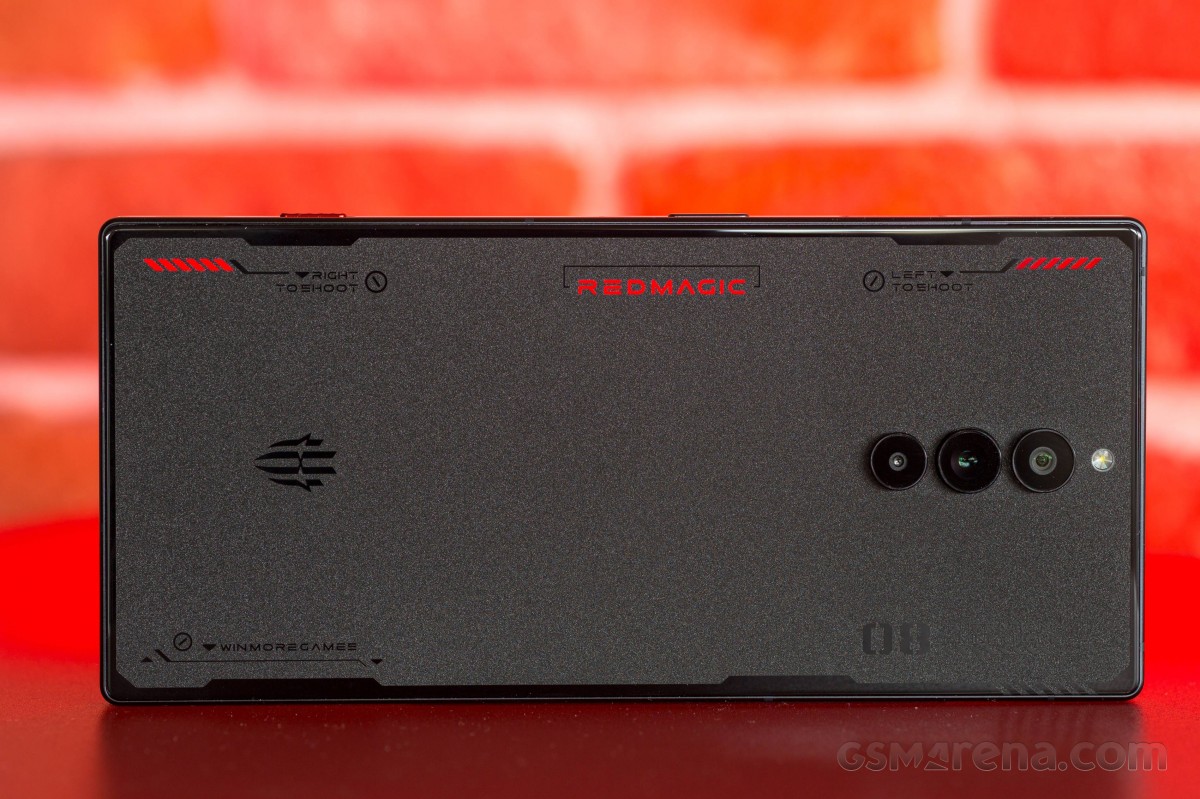 The system is capable of 16.8 million colors and 4096 levels of brightness. There is plenty of lighting customization available, including the ability to synchronize the lighting effects with sound.

Speaking of the REDMAGIC text on the back of the 8 Pro, the more keen-eyed among you might have noticed that nubia has redesigned its logos slightly. The new style is supposed to be bolder with stronger lines. Nubia is also limiting the use of red in its branding, though the color is still present as an accent here and there.

The front side of the Red Magic 8 Pro is all business. Nubia did an amazing job extending the display and shrinking the bezels as much as possible. The design is almost truly bezel-free, with a 93.7% screen-to-body ratio. 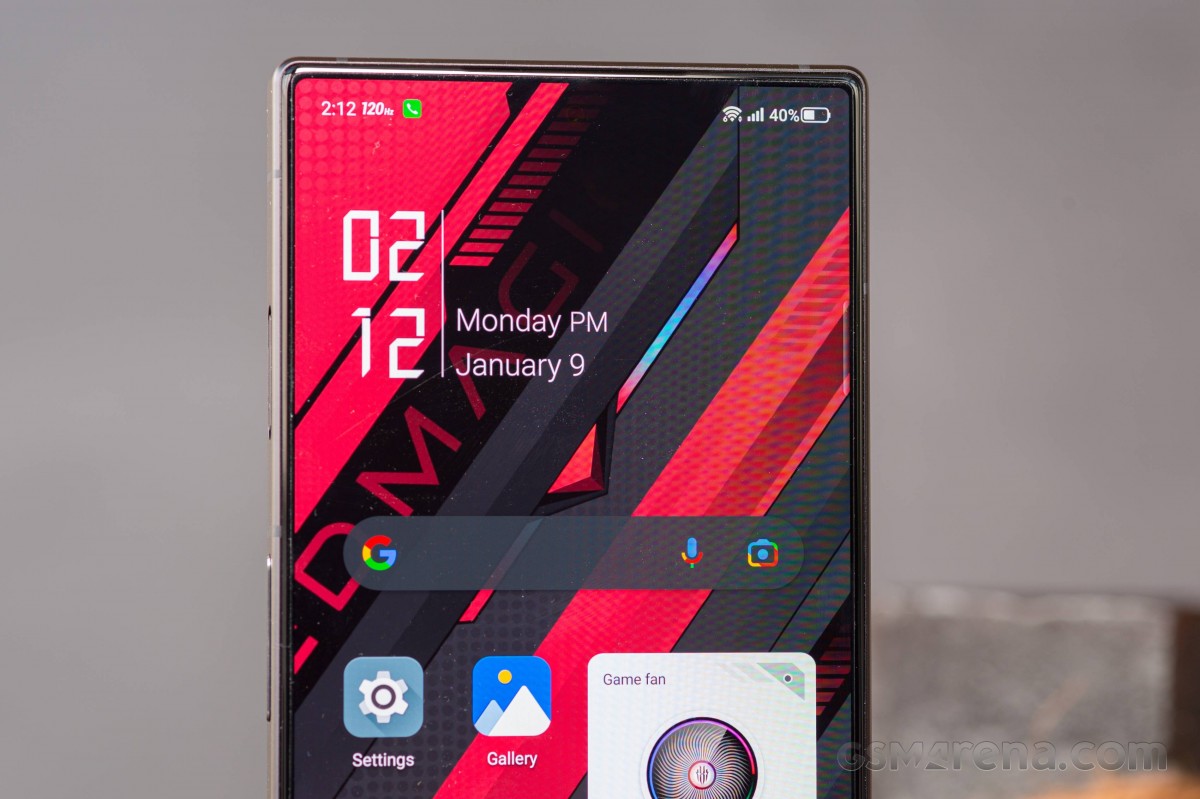 There are no distractions when it comes to the display, either. No notch or punch hole. Instead, nubia has worked closely with BOE to deliver a second-generation under-display selfie camera solution. It looks really good in person. The camera is almost perfectly hidden and barely noticeable in real-world use.

The Red Magic 8 Pro feels really sturdy and well-made, with practically no flex. It employs a standard three-piece construction with an aviation-grade aluminum middle frame for strength. 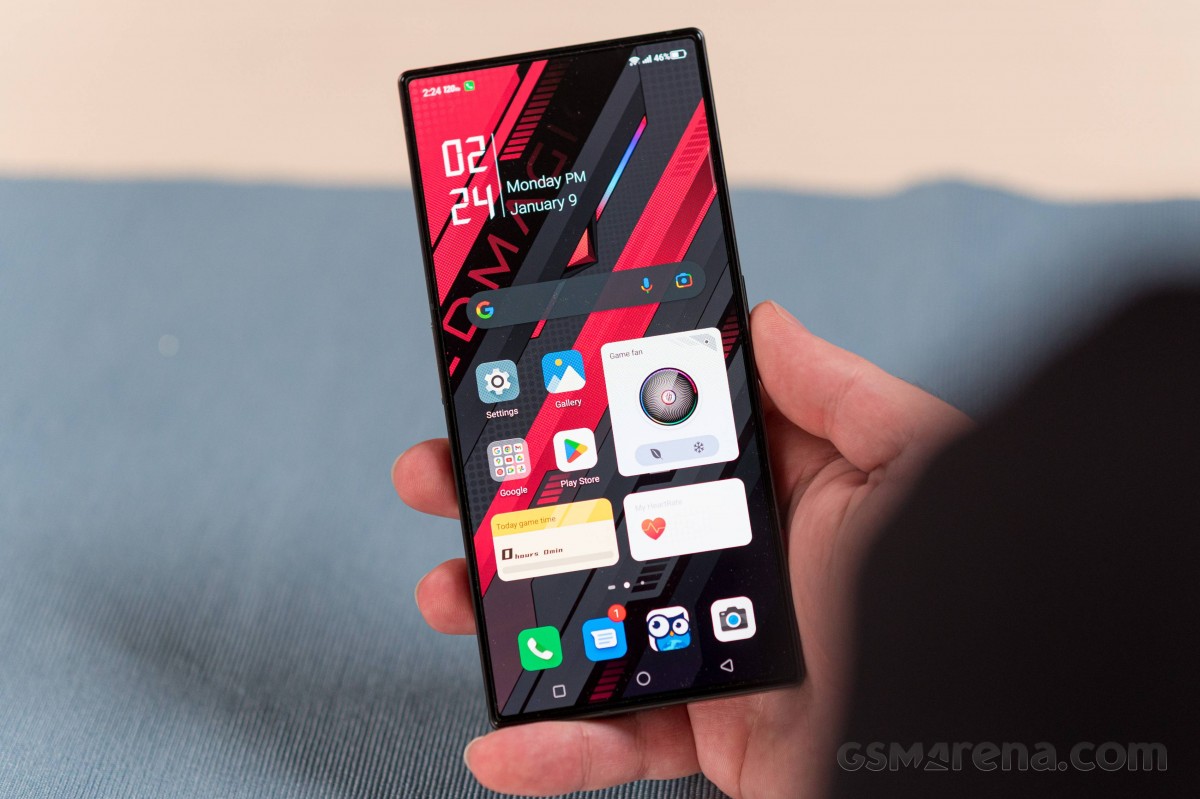 The front and back of the phone are both made of glass. Gorilla Glass 5 on the front, to be exact, and an undisclosed type of glass on the backside. Actually, the review materials are even vaguer still on the material of the back cover at times, calling it a "metal synthetic" rear cover, which could very well be true too. In any case, the back of the phone feels solid, and the finish is nice and does not retain grease or smudges too much.

While there is a rubber gasket on the SIM tray of the Red Magic 8 Pro, the phone lacks any official ingress protection rating. We can't imagine one would be achievable with the wide open chamber for the internal cooling fan in the first place and would definitely avoid submerging the phone for the same reason.

The Red Magic 8 Pro has a pretty non-standard and interesting set of controls and hardware scattered all over the phone. Starting with the left-hand side, there is an inlet for the internal air cooling system of the phone. Right beneath that are standard volume rockers. These feel good to the touch and are well-positioned. 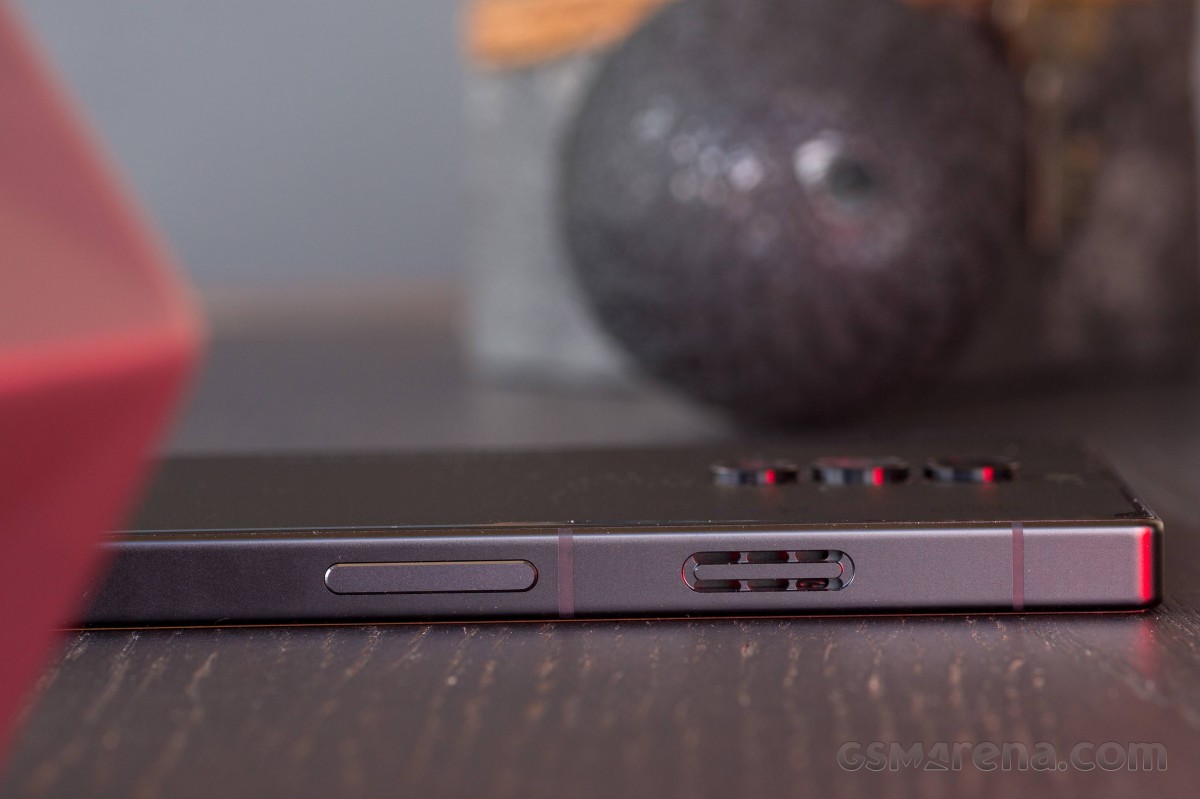 The right side of the Red Magic 8 Pro houses the power button, as you would expect. Just like the volume rockers, it is well-positioned and "clicky". The built-in 20,000 RPM cooling fan is also positioned to blow out the phone's right side. The fan has a very low power consumption and does not significantly strain the battery. 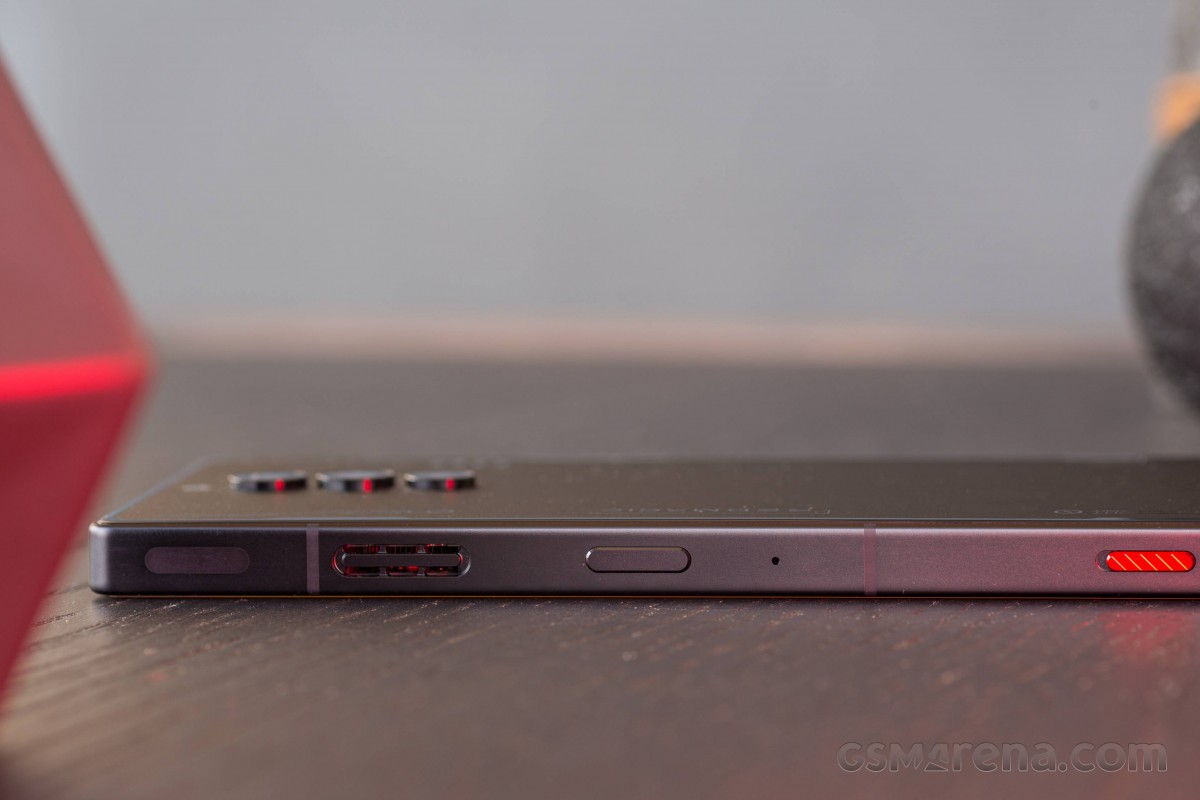 The fan itself has two speed settings, which can be freely controlled. At its top speed setting, it gets pretty loud and a bit obnoxious. Still, it can be easily drowned out by the speakers.

The right frame of the Red Magic 8 Pro also houses the two shoulder triggers. These have a 520Hz polling rate and a 7.4ms response time. 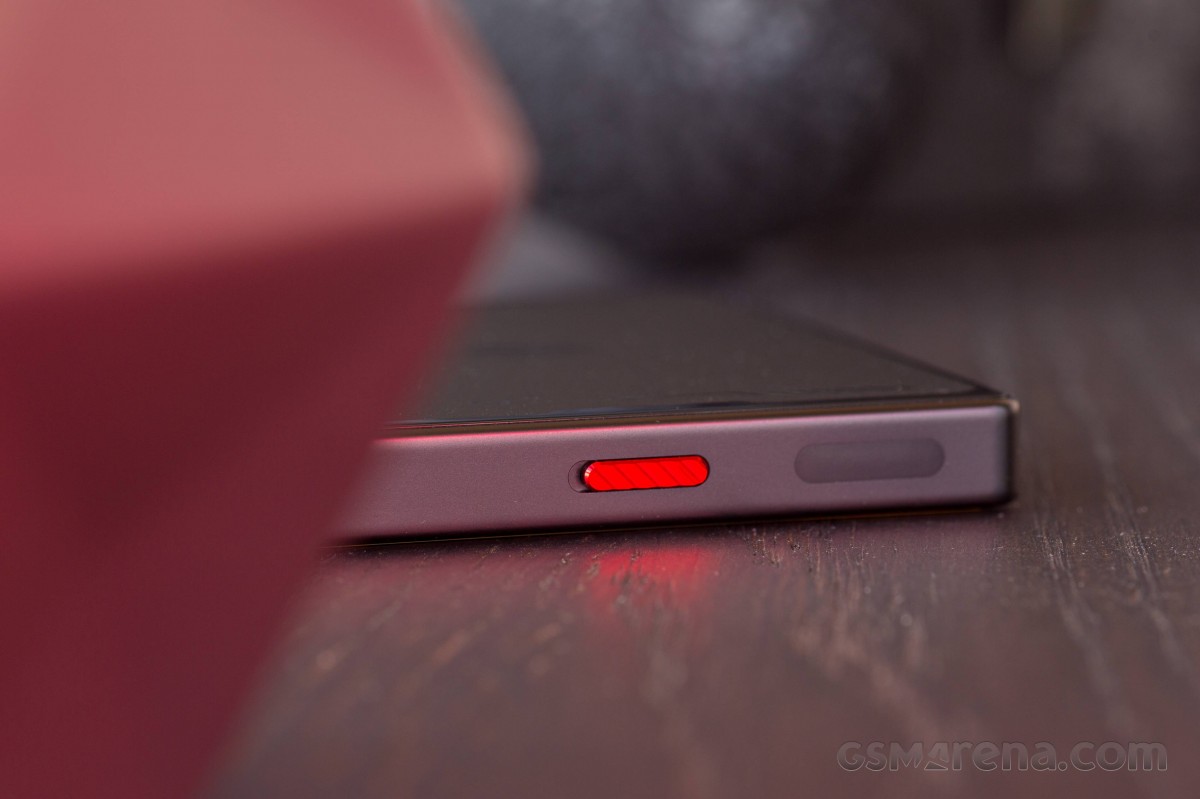 Naturally, you can map the two triggers as you see fit to in-game controls. It is worth noting, though, that, unlike the competing ASUS ROG Phone line, the triggers on the Red Magic only recognize presses and don't support more advanced interactions like swipes.

Last but not least, the right side of the Red Magic 8 Pro has a special red switch that just triggers the nubia gaming space of and off. You can't remap it to do anything else.

The top of the phone has the secondary noise-canceling mic (one of a total of three on the phone) and a 3.5mm audio jack - not something you see that often on modern smartphones. One of the two stereo speakers on the Red Magic 8 Pro is also on the top frame. Both units are 5-magnet linear speakers with DTS:X Ultra optimization and surround sound effects. 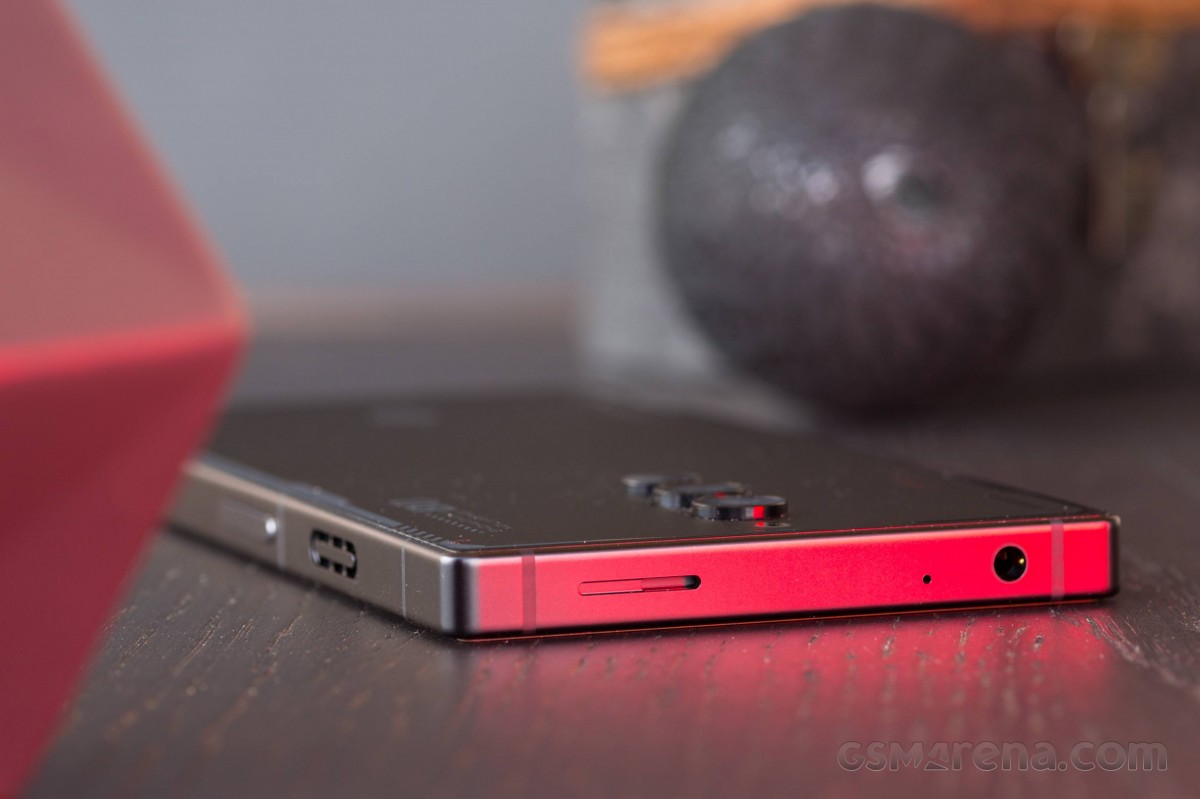 It is also worth noting that the Red Magic 8 Pro has two linear, double x-axis vibration motors. One is positioned at the top of the phone, while the other is at the bottom.

Speaking of the bottom of the phone, this is where the other speaker on the Red Magic 8 Pro resides. Also - the main microphone, the USB Type-C port and the dual nano-SIM card tray. The Red Magic 8 Pro lacks a microSD card slot. 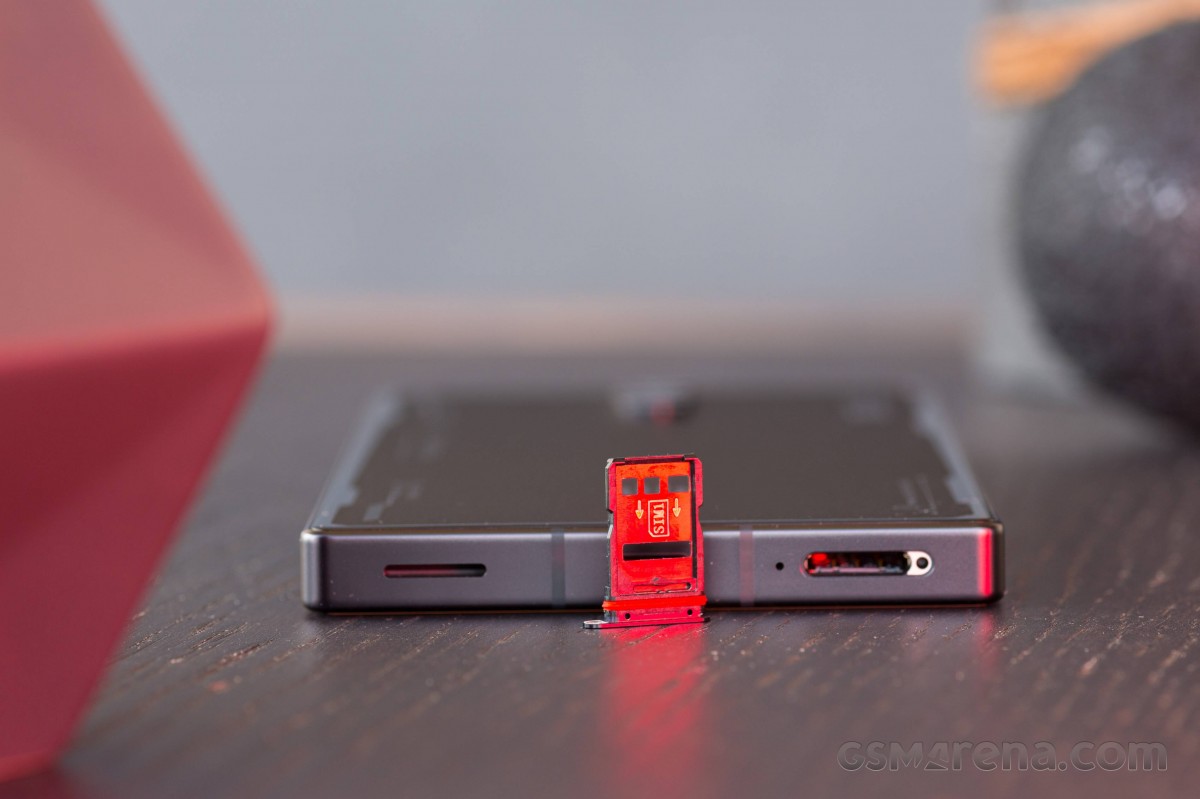 Last but not least, the Red Magic 8 Pro has an under-display fingerprint reader. It is a 7th-generation unit that is both snappy and very reliable. We had no issues using it whatsoever. It also doubles as a heart rate monitor, which is a nifty extra. 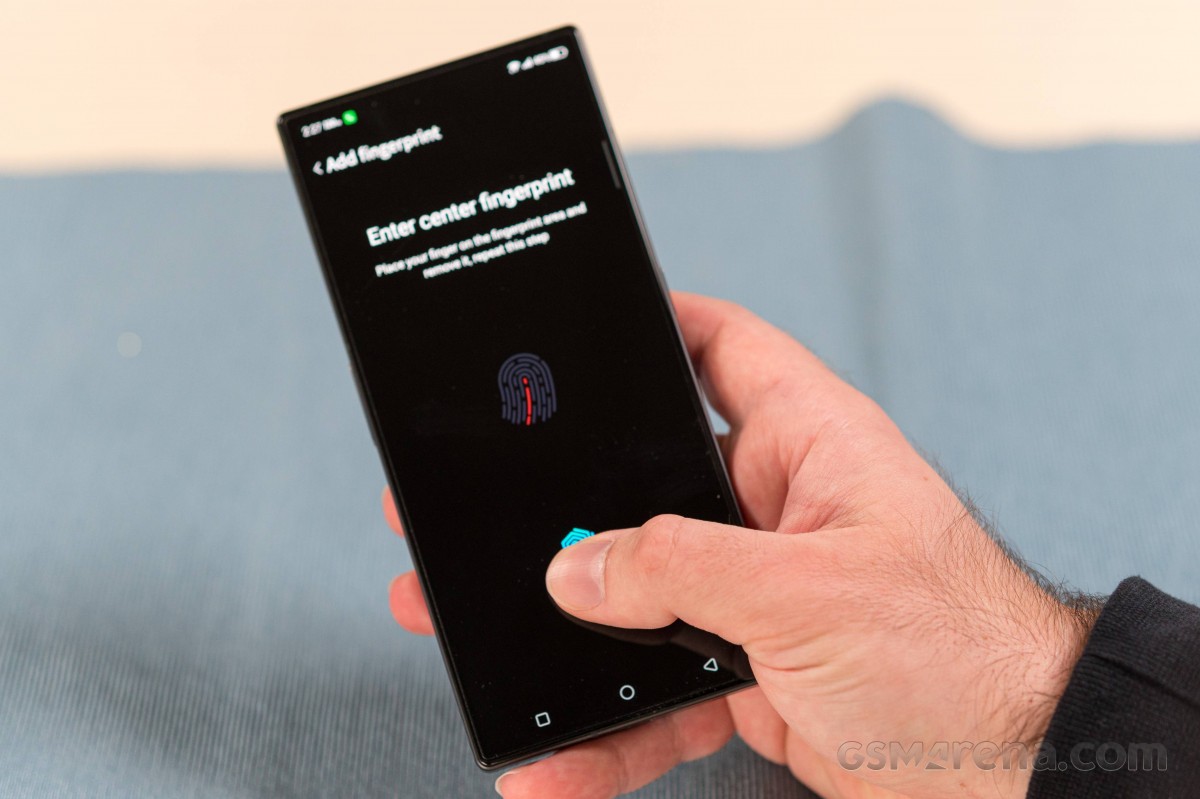 There are a few points worth making regarding connectivity on the Red Magic 8 Pro. For one, it has NFC, which is great to see. Also, thanks to its Snapdragon 8 Gen 2 chipset, it has Bluetooth 5.3 and Wi-Fi 7. The latter has not yet entered the consumer space, and you will be hard-pressed to even find a router that does Wi-Fi be. Still, that makes the phone future-proof. Wi-Fi 6e (ax) is also supported, and the Red Magic 8 Pro has tri-band Wi-Fi - 2.4GHz, 5GHz and 6GHz. 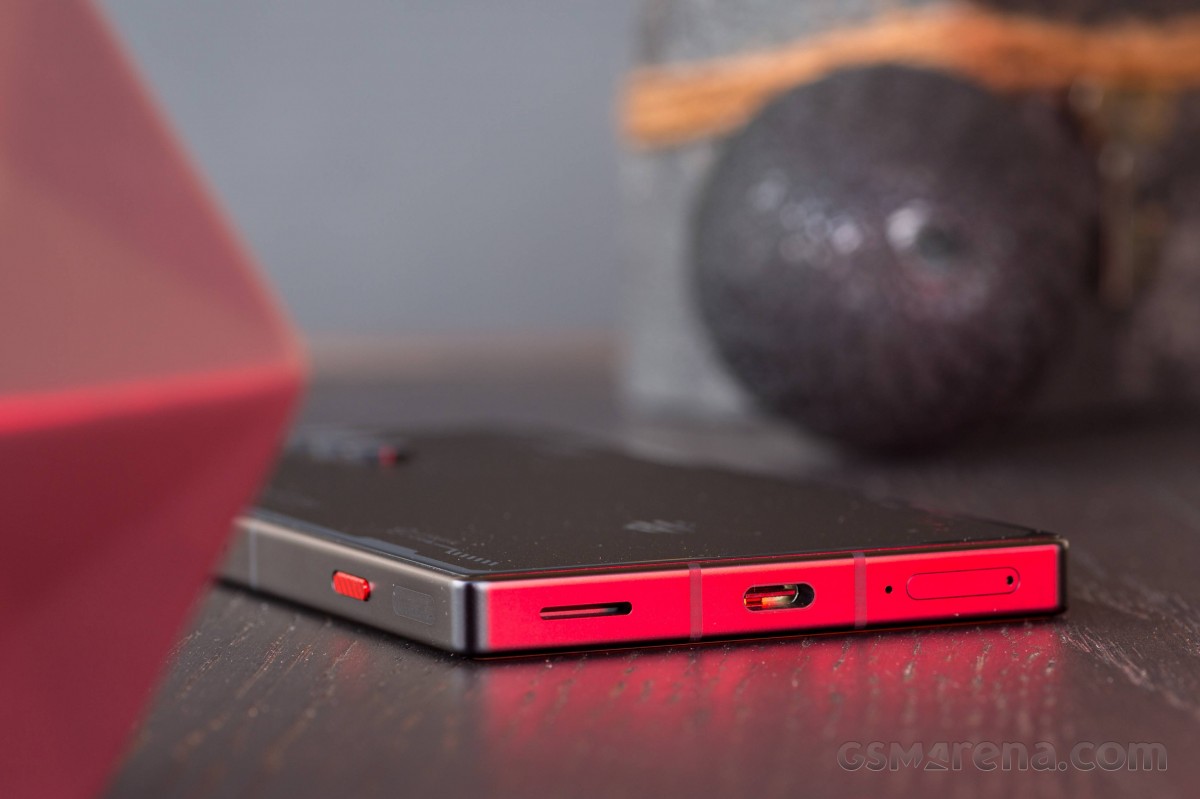 The other bit worth discussing is HDMI output via USB Type-C alt mode, which the Red Magic 8 Pro also has. This is not a common feature, and it facilitates all sorts of use cases, like working with a keyboard and mouse on a monitor. Or, more likely, in the particular case of the Red Magic 8 Pro - playing your games on a bigger screen. The Red Magic 8 Pro even has a dedicated UI/environment for casting games on an external monitor.

I can almost guarantee that text was written by either ChatGPT or the you.com chat bot. Just ignore it.

I don't know what you're quoting, but these are not the specs of this phone.