Nvidia Shield tablet and Samsung Galaxy A7 (2016) getting new updates

The over three year old Nvidia Shield tablet has started receiving a new update. Arriving as upgrade 5.3, the update brings along a handful of changes, including the latest security patch as well as fix for WiFi and some other connectivity-related issues.

So apart from the November security fixes, the update patches a couple of WiFi-related issues: KRACK and Broadpwn. Moving on, it also fixes connectivity issues with Zagg Bluetooth keyboards. And finally, there are some system stability and security optimizations as well. 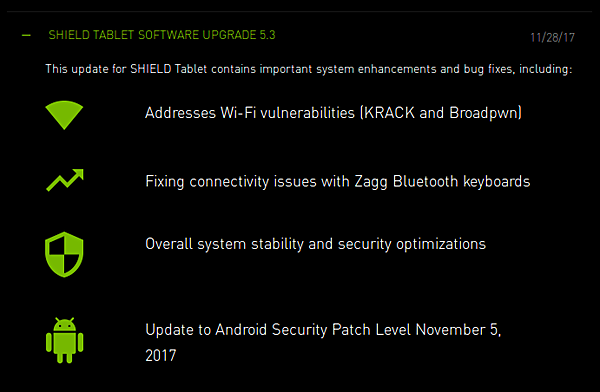 OS remains Nougat, and that won't be changing as it has already been confirmed that the device won't get Oreo.

Moving on, the Samsung Galaxy A7 (2016) has also started getting a new update. Currently hitting units in India, the update brings support for the S Bike mode. In addition, it also brings along the Samsung Members app as well as Android fixes for the month of November.

Or even better they should make a Shield Phone, that'll just blow Razer Phone into weeds.

In fairness there are no 3 year old Shields, they were replaced with newer ones due to the exploding batteries :P It was actually quite cool, we got sent an insulated box with anti-flammable packing to send them back in.

That would be a big slap in the face of the gimmick fake gaming device called Razer lel.