OnePlus 3 with SD820 SoC and 16MP camera spotted on AnTuTu

The successor to OnePlus' last year's OP2 smartphone has been spotted on AnTuTu, revealing some of its key specs. The listing reveals that the OnePlus 3 is powered by a Snapdragon 820 chipset and sports a 1080 x 1920 pixel resolution display (screen size is said to be 5.5-inch). 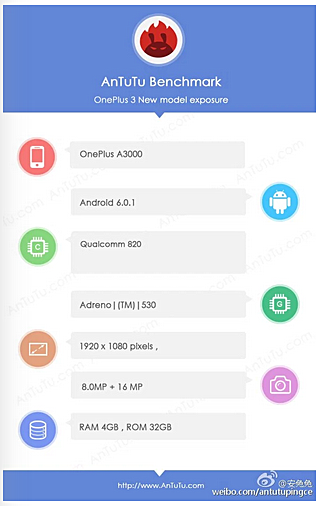 It has 4GB RAM and 32GB internal memory. In terms of camera, the handset features a 16MP rear unit and an 8MP front shooter. In addition, the listing also reveals a model number of A3000, and Android OS version 6.0.1.

As for the phone's unveiling, we're yet to hear an official word on it. However, OnePlus is reportedly holding an event on April 7 in China's capital city of Beijing, and speculations are rife that the OP3 will be the star of the event.

OnePlus Nord now available in the UK and Germany, the rest of Europe gets it in 2 days

in 5.5inch display qhd and fhd doesnt make any noticeable difference.. so 1080 fhd is enuf...

you expect them to give all those for below 25k ? dream on