The OnePlus 6T McLaren Edition will make its global debut on December 11 in London with an Indian event following on December 12 and finally a Chinese launch on December 14.

The latter date was made official by OnePlus themselves through Weibo. The 6T McLaren Edition will be shown at a special event in Shenzhen. 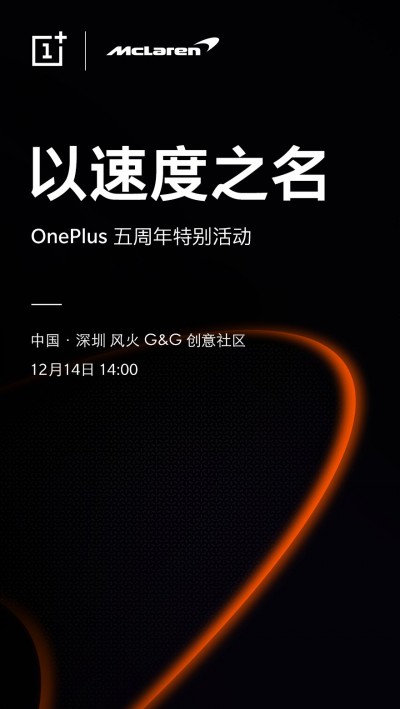 OnePlus' invite for the Chinese launch

There's still no word on the specifics of the OnePlus 6T McLaren Edition but there's a good chance that it will have 10GB of RAM and 256GB of on-board storage.

If we go by previous OnePlus partnerships (like the OnePlus 3T Colette, OnePlus 5 JCC+, OnePlus 5T Star Wars, and OnePlus 6 Avengers Infinity War) we can expect a new paint job, some exclusive accessories in the retail package and perhaps a McLaren theme on the phone.

Google is going to allow iPhones, Samsung, and OnePlus devices to Project Fi

Wow, this company has no shame.

For more 2GB of ram and same lower Amoled brightness including sloppy touchlatency not worth it meh.