OnePlus 7T will run Android 10 out of the box

OnePlus is expected to unveil the 7T smartphone at its event on September 26 alongside its first ever TV, and the company has recently gone back to its past antics of drip-feeding us information about the new device, one day at a time.

Earlier we showed you an official picture of the box, which is all red in a throwback to the days of earlier OnePlus phones, and now Pete Lau, CEO and founder of the company, has some more exciting news to share. Here's his full statement:

We're thrilled to offer Android 10, the latest software version, for our upcoming OnePlus 7T. OnePlus will be the first smartphone manufacturer to preload Android 10 with Google's apps and services on their latest device. Our 'Never Settle' mindset ensures we are constantly seeking new ways to share the latest technology, giving our community the best 'fast and smooth' experience possible.

The OnePlus 7T is going to be the first ever device to be launching with Android 10 out of the box - the full version with Google services preloaded. Huawei's Mate 30 series also runs Android 10, but due to the US-China trade war, those models are devoid of the Play Store and all other Google apps. 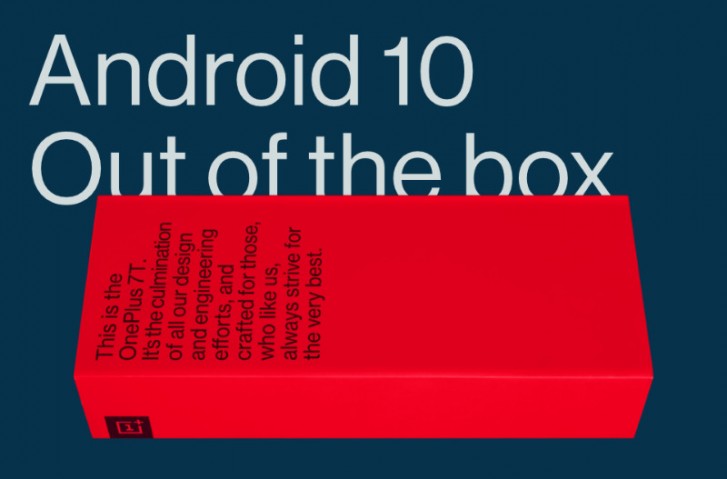 OnePlus has even managed to one-up Google itself with this, as the search giant will only unveil the Pixel 4 and Pixel 4 XL on October 15. Previously, OnePlus shared official renders of the back of the 7T, with its all-new circular camera island that houses a triple snapper setup, seemingly borrowing the cameras from the OnePlus 7 Pro.

All in all, it looks like the OnePlus 7T is shaping up to be quite a big upgrade to the OnePlus 7, all that's left to be revealed is how that will influence the pricing.

Forgot your tinfoil hat at home?

Well i bet 200 euros companies like Sony, Samsung, LG, HTC will give just pie in the all upcomming phones of this year. In case of LG and Sony even the 2020 phones most fo them will have just pie.