OnePlus Clover appears on GeekBench with Snapdragon 460 and 4GB RAM

Last week, we began to hear reports about a new OnePlus smartphone that the company is going to release called the OnePlus Clover. This happened not after the launch of the OnePlus Nord – a €349 smartphone with plenty of features and 5G support.

The latest news regarding the Clover is the phone’s Geekbench results have appeared on the benchmarking app’s website as per MySmartPrice. The device carries the model number “OnePlus BE2012” running a Qualcomm Snapdragon 460 chipset paired with 4GB of RAM as determined by fact that the phone is running an 8-core CPU clocked at 1.80GHz with the “bengal” codename. The OnePlus device scores 245 in the single core test and 1174 in the multi-core test. 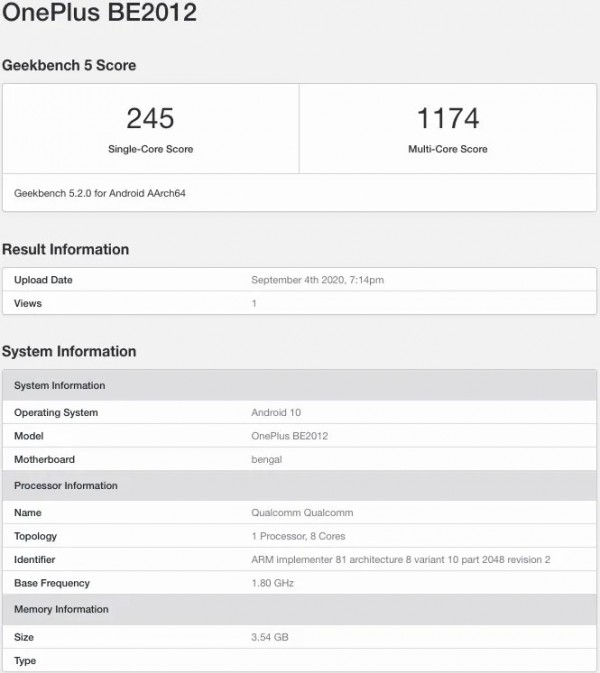 The OnePlus Clover will reportedly come with a 6.52-inch display with HD+ resolution and 64GB of expandable storage. A triple-camera setup is expected with a 13MP main camera and two auxiliary 2MP cameras. There’s also word of a 6,000 mAh battery and 18W fast-charge support. There’s also word of a rear-mounted fingerprint scanner and a headphone jack.

Although the Nord isn’t coming to the US market, reports claim the cheaper Clover will be. We wonder how well OnePlus can pull off a smartphone in the entry-level segment. There are many competitors in this budget segment, but will OnePlus be able to deliver a product good enough to out do entry-level offerings from Samsung, LG, and Motorola?

Back then cars brands made a lot of phones

just searched it up and damn thats weird