OnePlus has been focusing on its mid-range offerings lately and the latest leak is in the same category – the name “OnePlus Nord 3” was spotted on the company’s Indian site by leakster Mukul Sharma.

There wasn’t much besides the name, but we have already heard plenty about the phone. According to an unofficial roadmap, the device is slated for an unveiling in July. That roadmap was more or less correct about the Nord CE 2 Lite and 10R launches, it is yet to be proven correct about the Nord 2T, so take it with a pinch of salt. 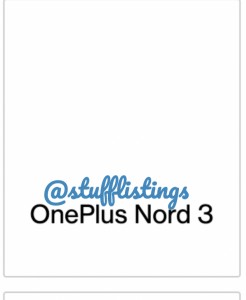 A OnePlus Nord 3 mention was spotted on oneplus.in

Anyway, rumored specs (by Digital Chat Station) suggest that the Nord 3 will be powered by the Dimensity 8100 (like the 10R) with up to 12 GB of RAM and 256 GB storage. The phone will have a 6.7” display with FHD+ resolution and 120 Hz refresh rate.

All this sounds too much like the 10R, so it is quite possible this was a case of mistaken identity as the OnePlus 10R already launched in India. Or it could be yet another rebranding – the same phone is called “Ace” in China.

theres a lot of rebranding going on nowadays,.its like companies have nothing new to offer...this might actually be the worst year to buy a new phone