It's been three months since the OnePlus Watch first went on sale. Unfortunately for OnePlus, the watch was released to widespread critical disapproval; our own review found it to be a poor smartwatch, a mediocre fitness tracker, and a lackluster timepiece for the asking price. 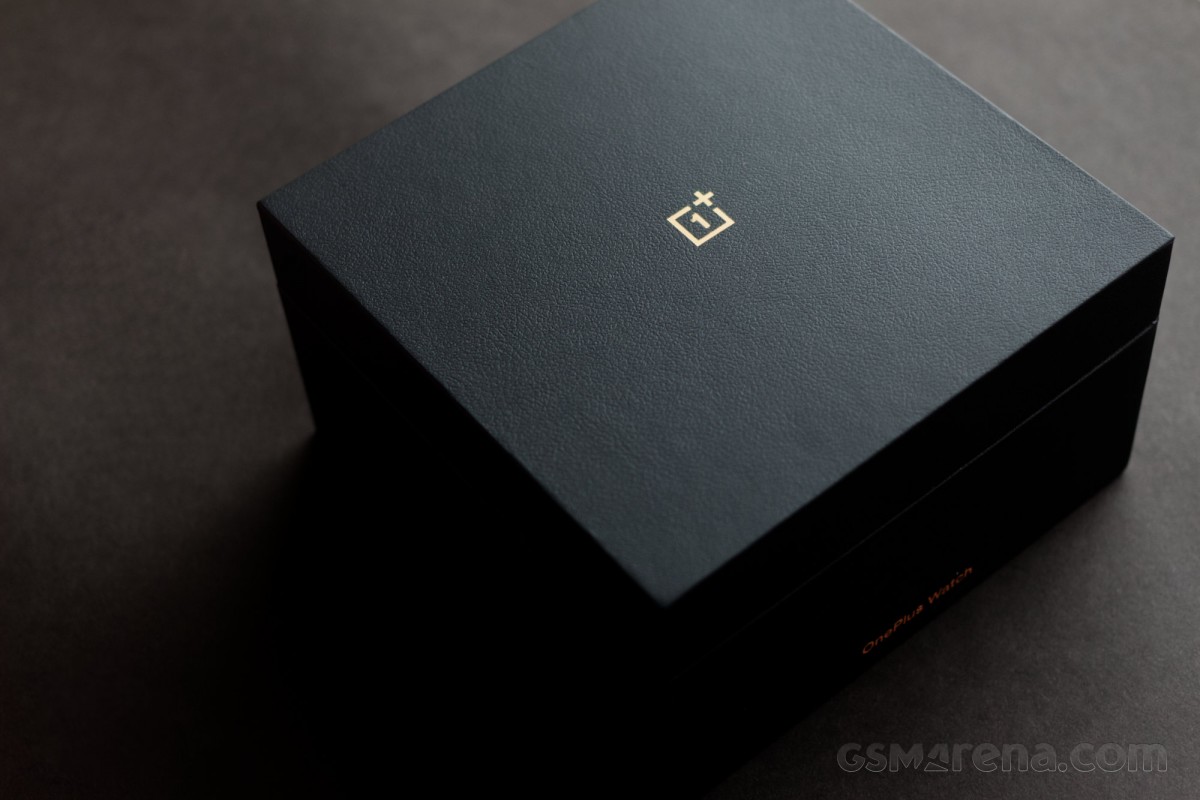 Today, the company is launching the Cobalt Limited Edition. This variant features a cobalt alloy body, sapphire glass, and vegan leather strap, all for an even higher price tag than the standard model. However, OnePlus has also been hard at work for the past three months, adding many of the features that it was criticized for. So we thought this was a good opportunity to check out the new fancy new finish as well as see how much progress the watch has made since we last reviewed it.

Unlike the long, thin box of the standard edition, the Cobalt limited edition comes in slightly fancier packaging. You get this nice, square box with soft-touch material coating on the outside. The lid opens up on a hinge as you'd expect from a premium watch or jewelry packaging. 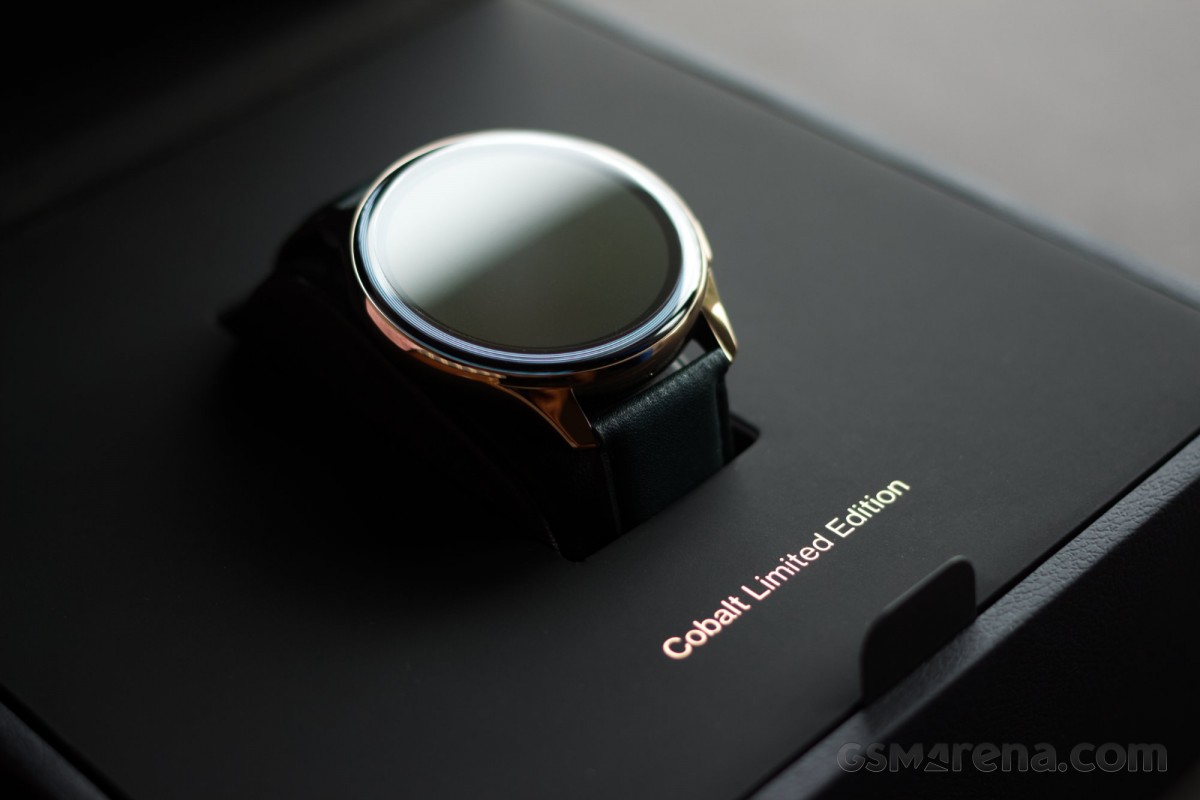 Inside, the watch is set clasped around a cushion in the center. Setting it aside for a moment, the box reveals a second compartment underneath for the accessories. Unfortunately, there's nothing particularly special about these, as they include the same USB magnetic charging puck (in the same black color) as the standard edition, along with the fluoroelastomer strap that you get in addition to the pre-installed vegan leather strap. The strap is also the same black color as the Midnight Black variant that we reviewed before and not color-matched to the Cobalt edition. 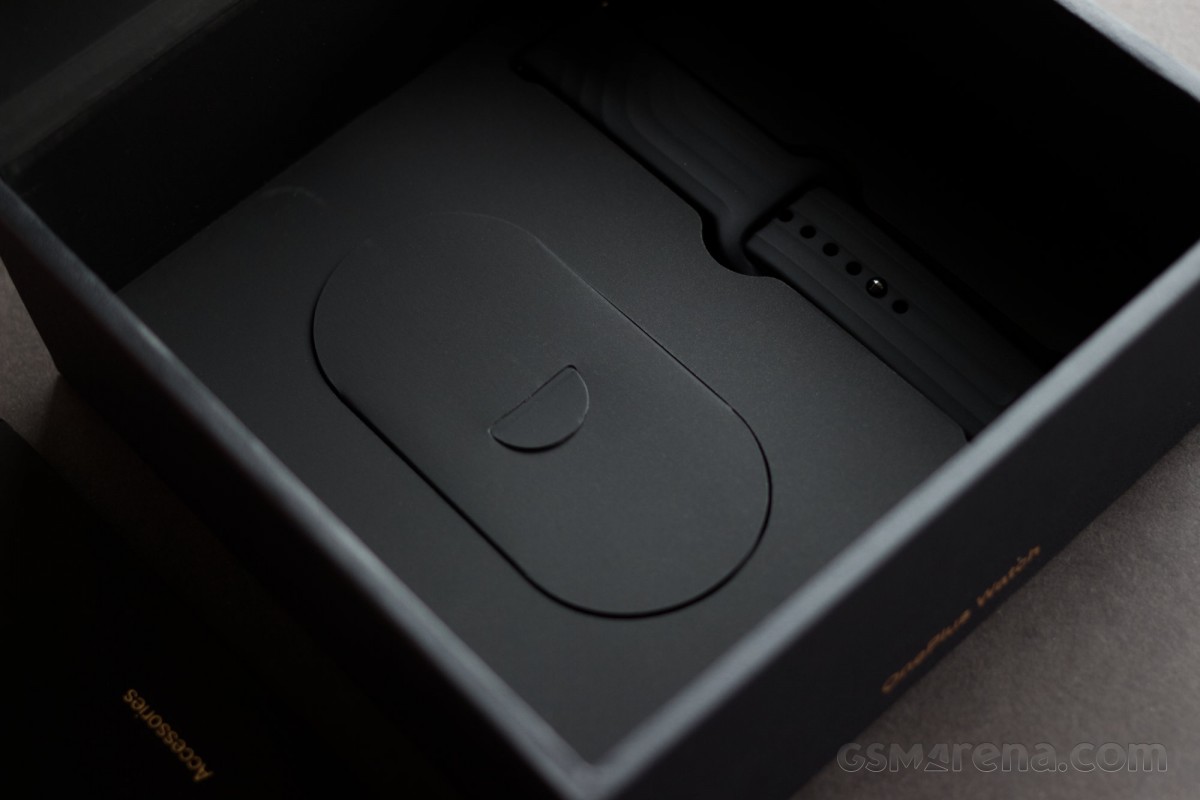 Now, the Cobalt edition is not meant to be a super-premium variant of the OnePlus Watch like the 18-karat gold Apple Watch Edition. Having said that, some color-matched accessories is not too much to ask for. You don't even get a charger in the box.

Getting back to the watch, the actual design of the Cobalt edition is identical to the standard edition. However, instead of the polished stainless steel middle frame, the Cobalt edition uses cobalt alloy, which OnePlus claims is the first smartwatch in the world to do so. 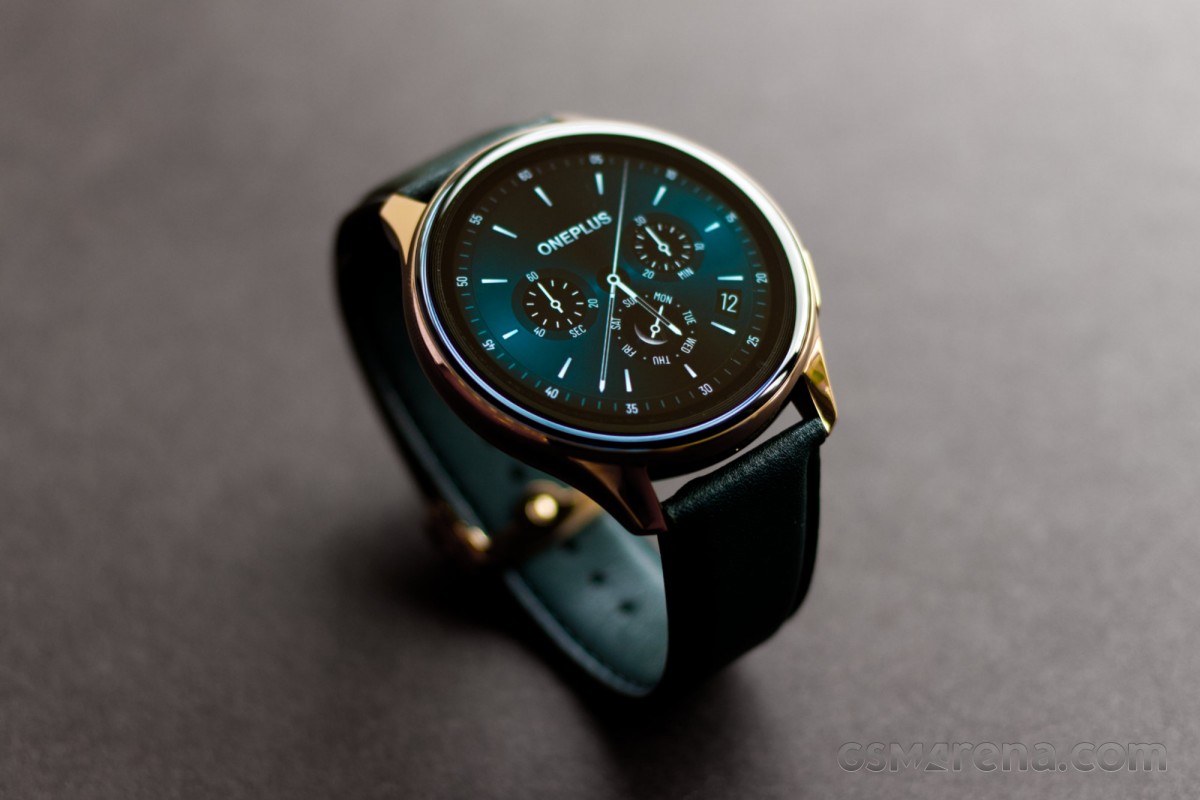 The cobalt alloy has a very muted gold color, which is a lot more subtle in the real world than what might appear in the images. It's closer to rose gold but is more prominently brown with just a touch of red to it.

I do think it's quite nice, and if, like me, you also detest gold watches, then you may also prefer this to traditional gold finishes.

OnePlus also claims that the cobalt alloy is twice as hard as stainless steel, but unless you are constantly banging your watch around, this isn't going to be especially important. 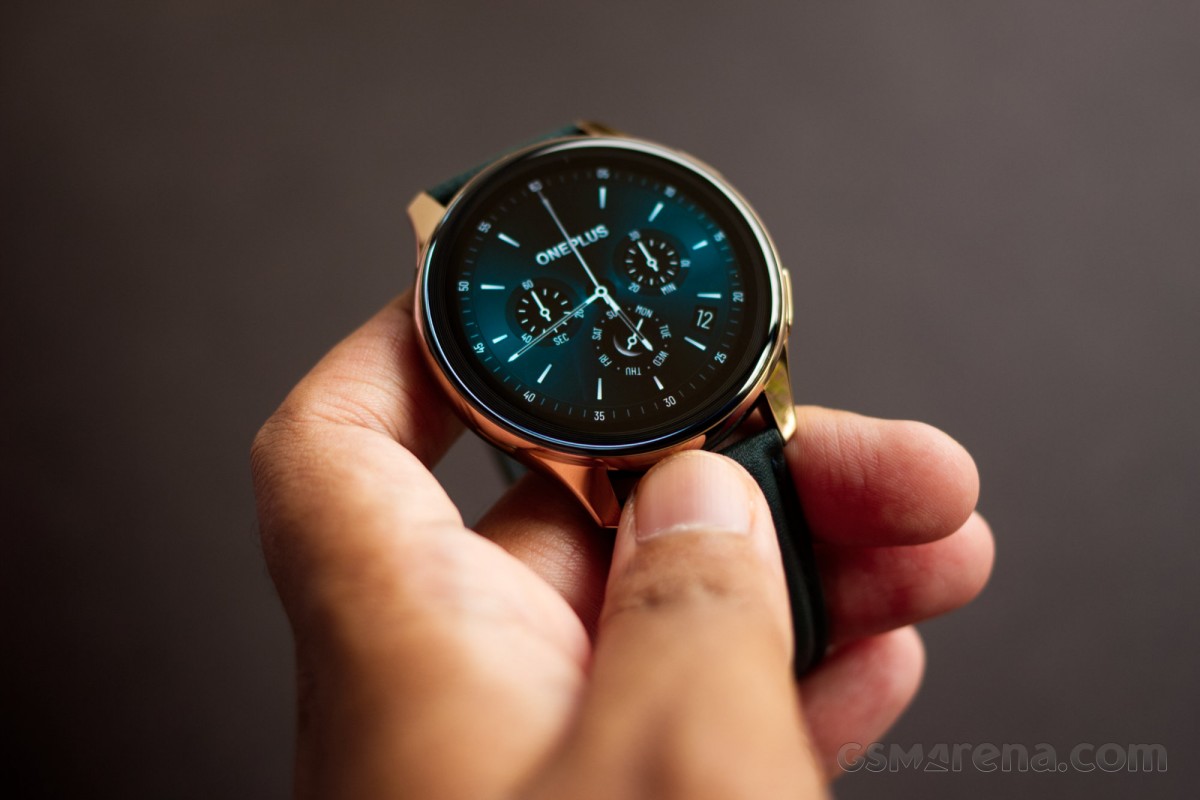 Topping off the cobalt alloy frame is a sapphire glass for the display. Visually, it looks identical to the traditional glass used on the standard model, even in terms of thickness. Of course, the advantage of sapphire glass is the utterly ridiculous rigidity of the material, second only to diamonds. This is a bit more practical than the 2x rigidity of the cobalt alloy body, as you are far more likely to scratch the watch face than the body, but with this sturdy glass, the only thing you have to worry about is breaking other people's watches if you accidentally hit them with this. 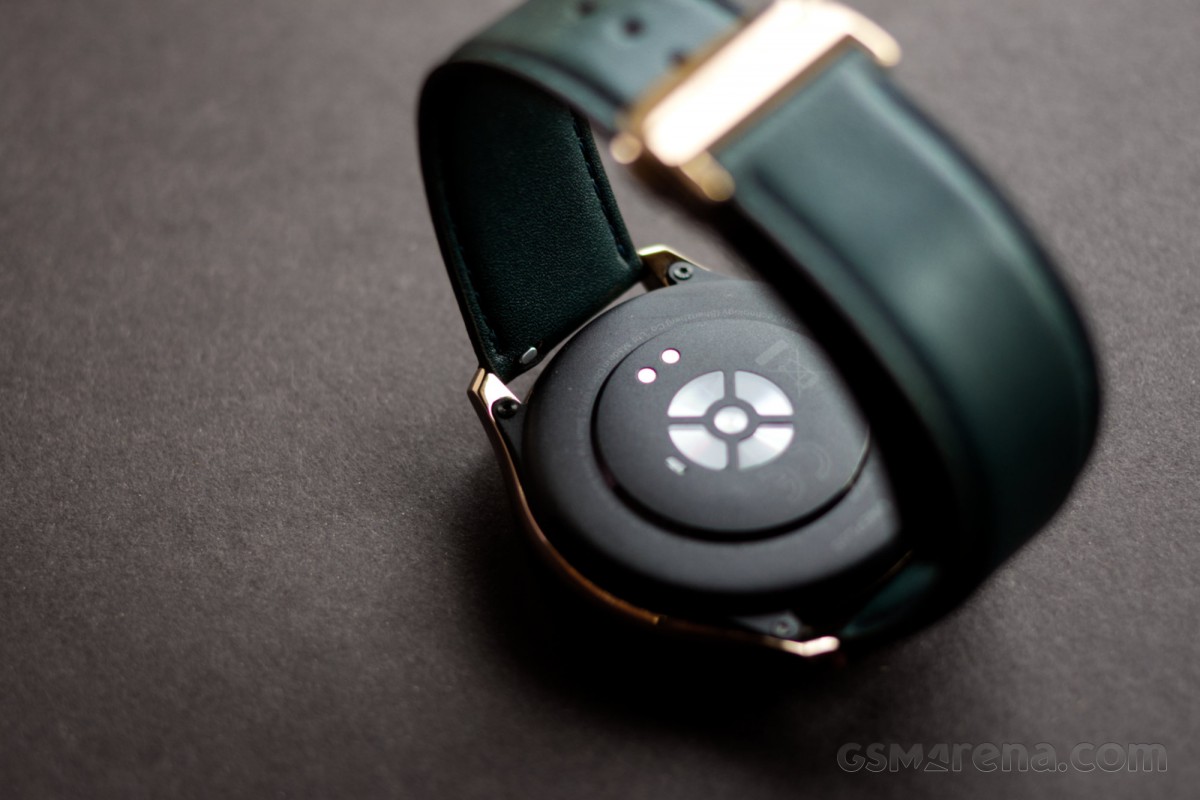 The bottom of the watch is still made out of plastic, like on the standard edition. It's not particularly offensive since no one will ever see it, but as with the standard model, you miss out on the cool touch of the metal on your wrist, which makes the whole affair feel far less premium.

Lastly, there's the new leather strap, which has a deep emerald color with turquoise stitching that goes well with the color of the watch. It features a butterfly buckle that opens and closes rather easily and is also fairly easy to adjust to your wrist size. The metal buckle has the same color and finish as the watch, although it's not clear if it's the same cobalt alloy material as the watch. 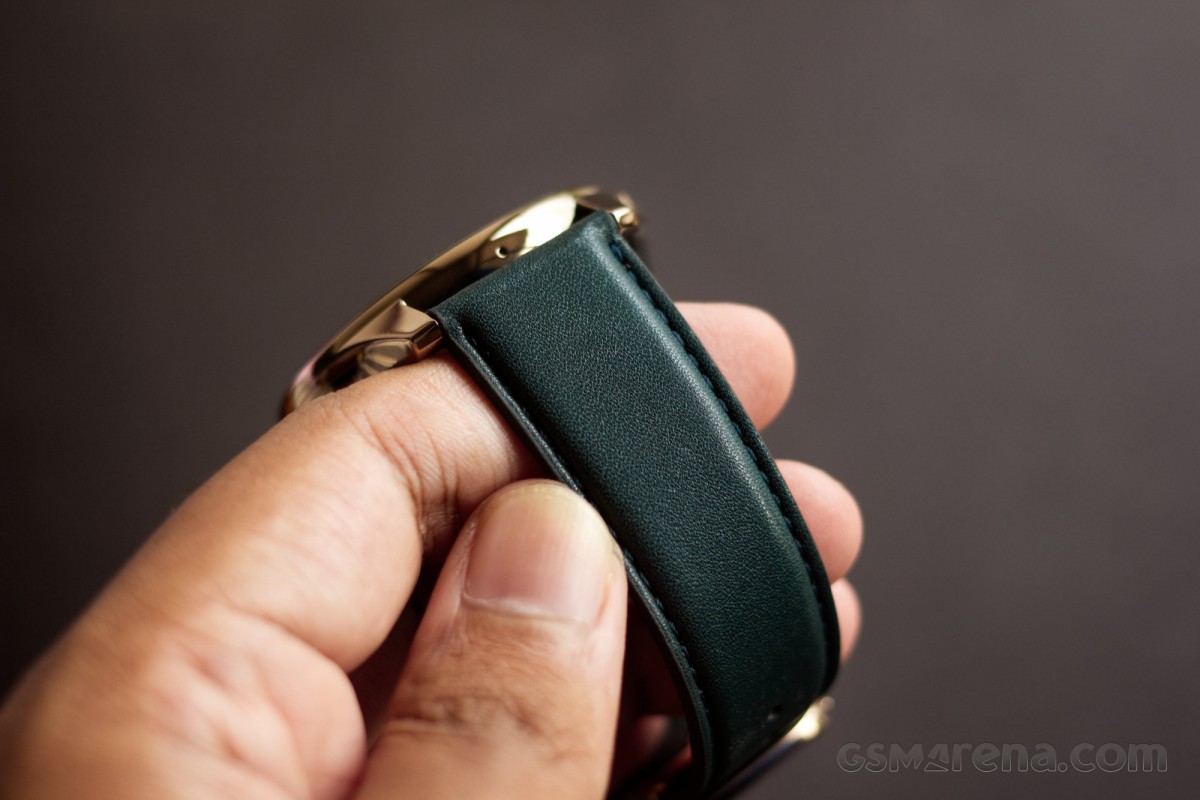 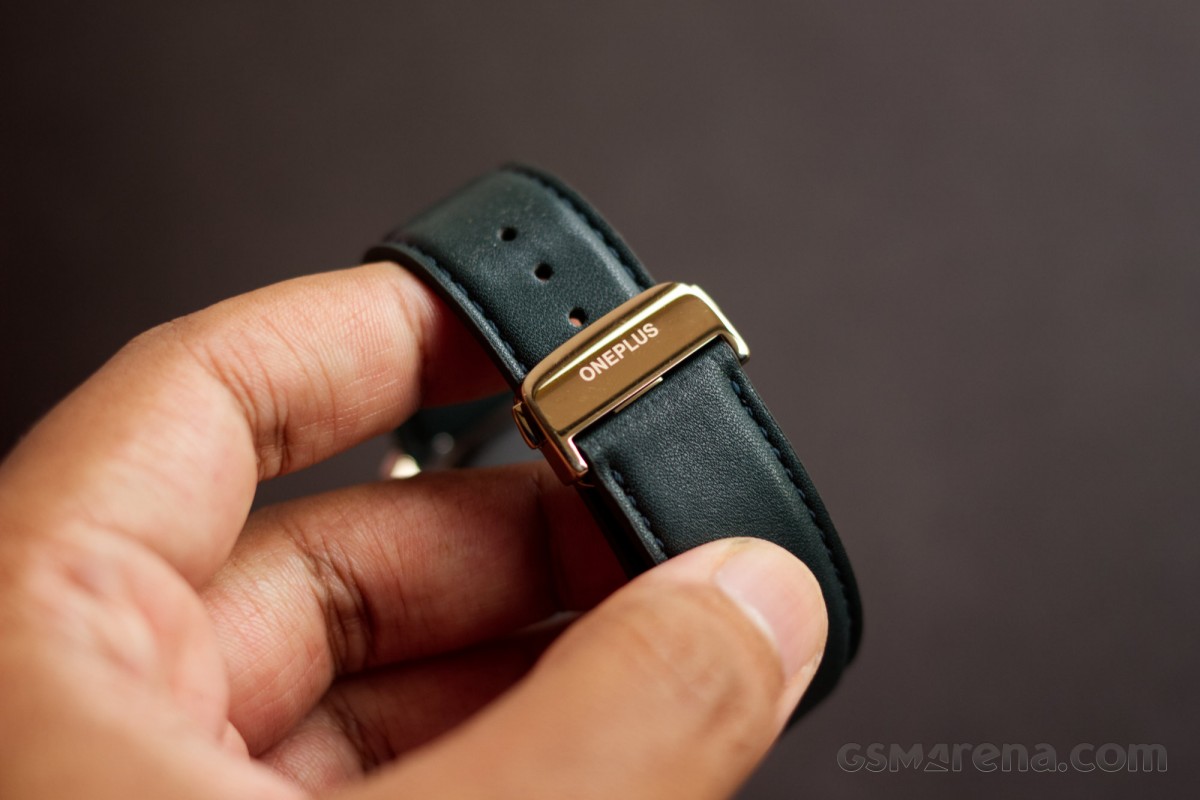 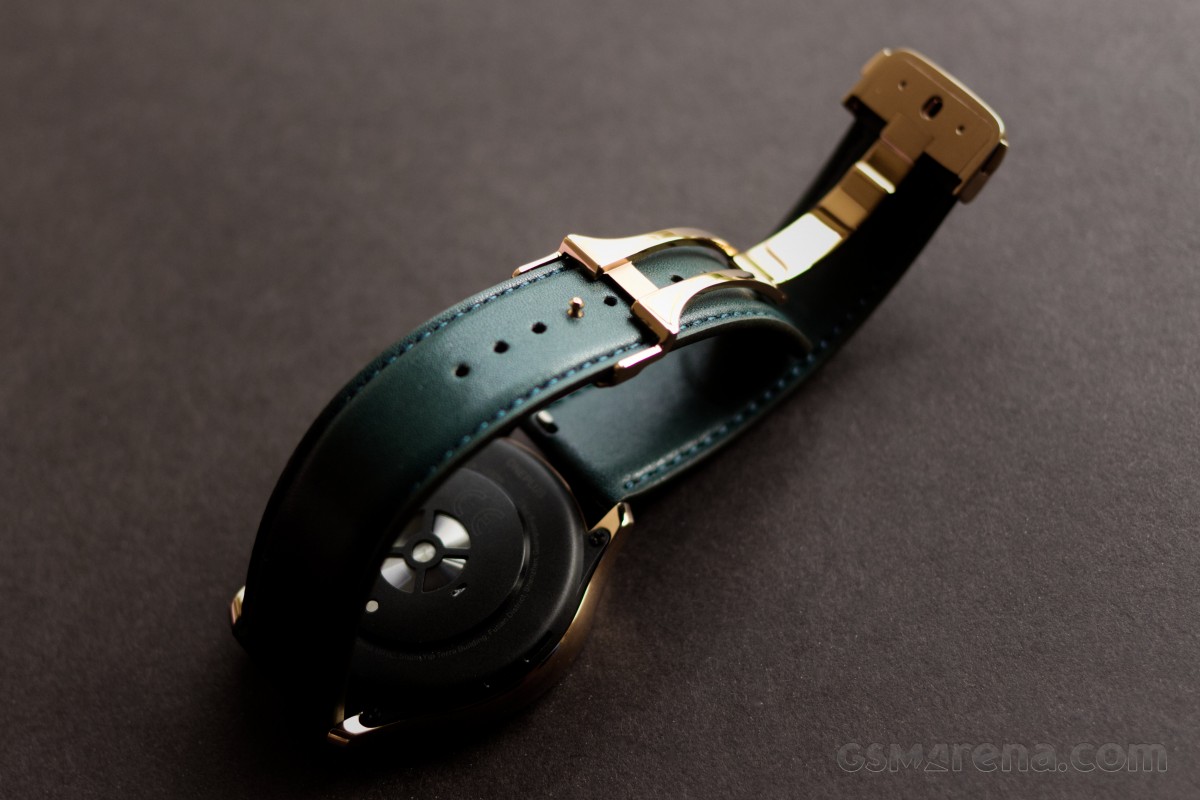 As mentioned before, the Cobalt edition also comes with the standard black fluoroelastomer strap in the box, so if you plan on going for a swim with your watch, you don't have to worry about ruining the leather belt.

Considering the fiddly strap removal process, I don't see anyone doing it regularly, which means most people who workout regularly will likely just use the fluoroelastomer strap and swap to the leather strap on special occasions. 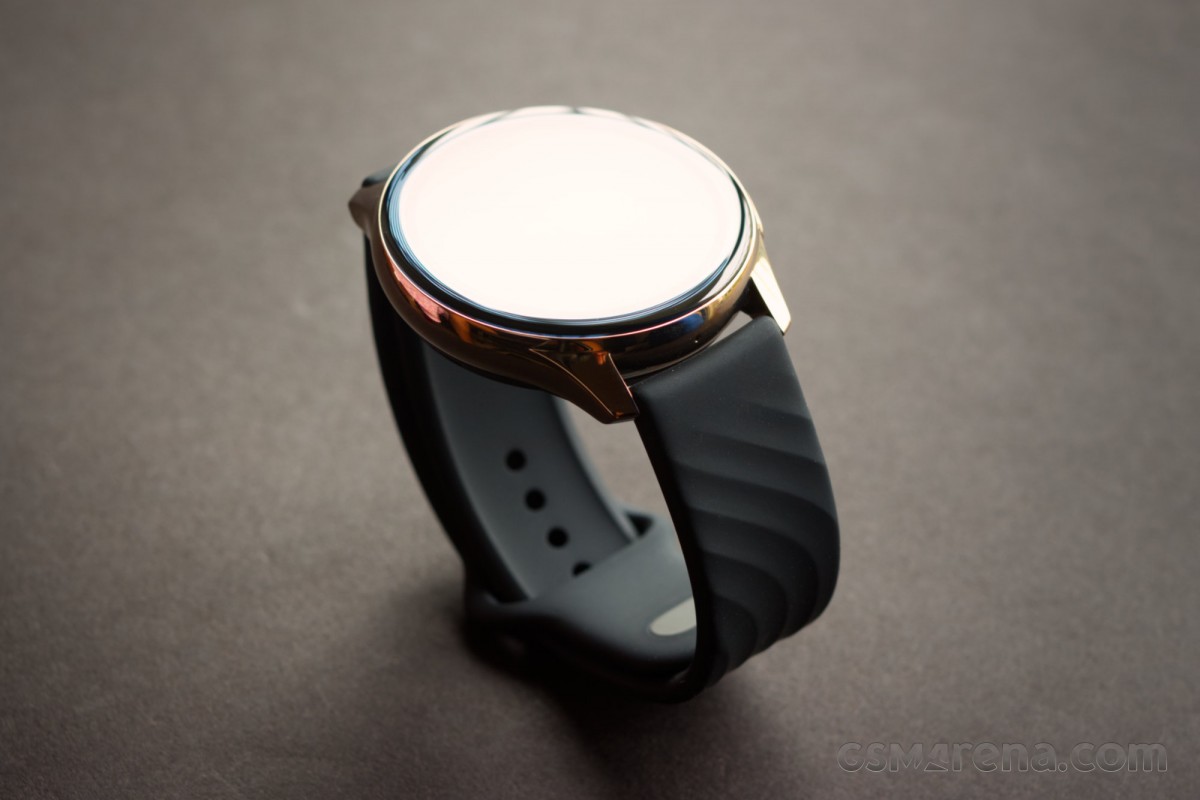 The leather in our case was vegan leather. Made from synthetic or plant-based sources, this material has been made for years now and known by different names but adding vegan to everything now earns you additional brownie points, never mind the fact that vegan leather may not necessarily be good for the environment. That aside, it does still feel quite remarkably like real leather and even has a similar smell to it, which I thought was interesting.

It's not clear if this material will also age like real leather, but it will likely not gather the same patina. On the upside, this means it may look new for longer. 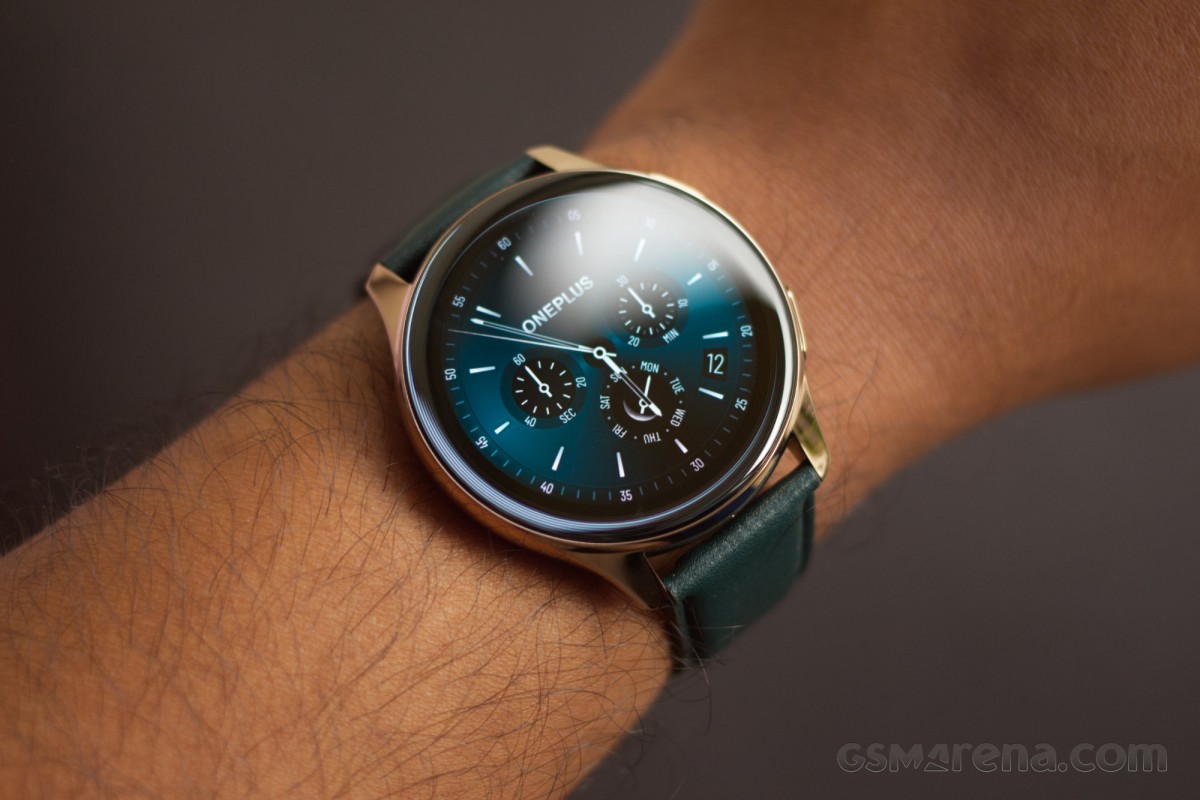 Overall, I think the new Cobalt edition is an attractive, premium-looking watch. The color combination here is subtle enough to be used for everyday wear, and the materials are comfortable for all-day use.

My only issue here - just like the original version of the OnePlus smartwatch - is its size. At 46mm, the watch face can appear a bit overwhelming, and on smaller wrists, it looks like you have a frying pan strapped on.

I do appreciate the slightly daintier appearance and width of the leather strap compared to the fluoroelastomer band, but it only makes the watch appear even larger.

Not too long after the OnePlus Watch was released, OnePlus pushed out a flurry of software updates, one of which brought the sorely missed always-on display mode. Had this shipped on day one, the OnePlus Watch could have avoided being piledriven into the ground by the media, but then we wouldn't have all learned a valuable lesson about never releasing half-baked products.

The always-on display works as you'd expect, which is to keep the screen on so you can do cool things with your watch, like see what the time is.

The always-on mode on the OnePlus Watch has its own set of watch faces, four to be exact (two analog ones and two digital). They all employ really thin fonts for the digital faces and thin hands for the analog faces. This can make them hard to see at times; one of the analog faces is basically useless because of how dim the hands are.

The AOD mode is also unaffected by the ambient light, so it doesn't get brighter in bright lighting.

Lastly, the AOD mode only works for the clock; you can't, for example, start the stopwatch and have it appear on the AOD so you can passively see it without waking the watch.

All of this makes the AOD mode on the OnePlus Watch far less than ideal. Don't get me wrong, I'd still take this over not having it at all, but it's clear OnePlus was hyper-paranoid about battery life and has nerfed the AOD mode to the point of being nearly useless.

The other thing OnePlus added was a metric ton of workout modes. One of my complaints in my original review was the lack of gym workout modes in the launch firmware. Since then, OnePlus has added so many workout options that it should count as a workout simply to go through the entire list. I'm not even going to bother listing all of them here as it would take all day. Just watch this video instead.

At this point, short of inventing your own workout, it's clear the OnePlus Watch will have you covered.

Lastly, OnePlus also added a bunch of watch faces through its OnePlus Health app. There are now 54 of them in total, which should be plenty for most people. Unfortunately, you are still dependent on OnePlus to add more watch faces as there is no way to create and distribute custom watch faces for the OnePlus Watch.

And that remains one of the issues with the watch, which is part of the overarching problem that this really isn't a proper smartwatch even if this distinction alludes OnePlus.

Aside from not being able to download watch faces, you also cannot download any applications to the watch. There is no voice assistant on board to serve your queries. The watch has NFC, but as of yet, there is no way to use it for anything. The lack of cellular connectivity means the watch can only be used with a phone for voice calls. As such, it remains a glorified fitness tracker.

The problem, I suppose, is with the marketing. The OnePlus Watch could have been the smartest dumb watch, and that would have been fine. Instead, it ended up being the dumbest smartwatch, which is what's disappointing.

The OnePlus Watch Cobalt limited edition is priced at INR 19,999 ($268) in India, which is a bit more than the standard edition priced at INR 14,999 ($201). While the difference in price isn't much considering the difference in materials, the standard edition itself is expensive, which makes the Cobalt edition harder to justify. OnePlus wants to position itself as the premium option in this category, but I'm not sure it's entirely justified. 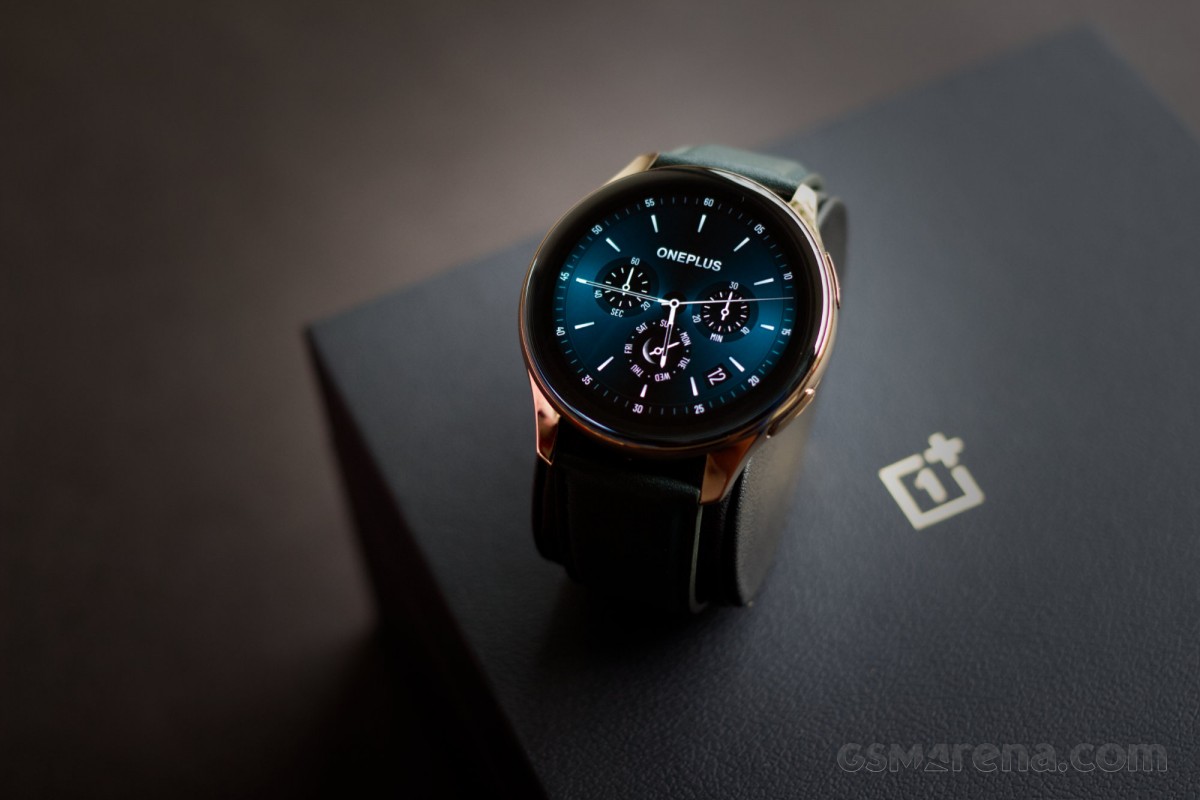 Unfortunately for OnePlus, there are far too many alternatives on the market today that are cheaper and in some ways better than the OnePlus Watch. It's not a bad watch by any means, and it's certainly a lot better now than when we first reviewed it. If you were to buy one today I don't think you are going to be disappointed unless you went in expecting a bona fide smartwatch.

But regardless of what OnePlus tells you, the OnePlus Watch isn't a smartwatch but rather a really good fitness tracker. You can get similarly good fitness trackers for less money or buy a proper smartwatch for a bit more. This leaves the OnePlus Watch in a no man's land, and I think OnePlus should step up and own this distinction for its own benefit rather than trying to pass on this device for something it's not.

Its friendly for skin any damage due to sweating