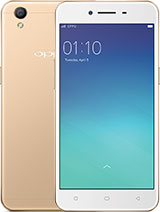 caliber, 28 Aug 2021My A37f still working pretty well consider its a 5 year old... moreI had 2 of these and still in good condition including the battery

My A37f still working pretty well consider its a 5 year old phone (bought it August 2016).. the hotspot wifi, music, bluetooth and also works fine with not so high definition games.. and still managed some social apps (IG, FB, Whatsapp) too... i can still boast this stuff for its SnapDragon chipset and with its decent build (glass front, aluminum frame and back).. for me its a good "collector's item" and a really a good stuff.. i wonder oppo might give a special OS update on all A37 devices, it is not possible though, but im still hopeful..

ojx, 05 Aug 2021if you're considering to get a A37, don't. i used... morebro u used a second-hand the previoused user must have trashed it. a37 is the coolest phone ever, its snapdragon memory makes pub-g so smooth

if you're considering to get a A37, don't. i used a second hand for about a year and a half, and the performance is trash. it's really slow in processing and loading even the most basic of apps like Whatsapp. it takes a minute just to load the chats. don't even talk about gaming. it runs games so poorly, which is not a big surprise for its old SD 410, but it's really bad for a 2016 phone. if you're just looking for a budget/midrange phone, you're better off buying a Oneplus Nord or another Oppo. i give the A37 2/10.

jim, 20 Apr 2018the phone's performance is fine. you can feel the warmth at... moreturn on eye protection to make it yellowish but safe for the eyes

Anonymous, 12 Apr 2020This is not build in gaming I use security center to clean my files, but I see 2 files but it says "this file cannot be removed". I think it's a virus

i love the gadget.. hgot it in 2016 update still using it.... its been falling from high heights but still working... features are never fade....

Oppo A37 is indestructible. I got my hands on it in 2017 and God knows how many times I've thrown and smashed and accidentally dropped mine and till this day, it still usable though the Wifi, Hotspot, and Bluetooth features are no longer operational but aside from that I can still go online using SIM card.

I've just bought a oppo a37m. I got an issues here.

1. first of all this phone is suddenly dead and reboot by itself specially if I've doing something heavy such as video call or doing google meet. I wasn't so happy about this cause while I'm talking it's suddenly shut down and restart back.

2. Second issues that I've been through on this phone is I see in setting it has eye protection mode and simple mode but when I try to activate it suddenly out to home screen.

That's all from me I hope someone can help me out and giving me idea of solution on this phone. Thank you❤️

has a very bad lag problem anyone know what to do

Leya, 29 Jun 2021Bought it when i passed my exam with flying colours when i ... moreoppo

Turn on screen for notification s not working

Bought it when i passed my exam with flying colours when i was 15..good specs and still serve me good until may 2021..shifted to Oppo Reno4..with snapdragon 720G..my sister's phone with chipset mediatek coudnt handle long usage and hotspot despite its 4000mah and newly bought about year and half ago..my oppo A37 could survive all that until about 4 years..to add, ive been very vigourous with this phone when online classes took place since last year..and i guessed if i were not to use it for online classes..it may lasted longer..and i wouldnt shift to my new phone 😁..its camera too..u know what i mean with its beautify function..thats all..

This smartphone has been in service with me since 2017, and has helped me alot in watching YouTube and playing low graphics games. This phone is now being used as a secondary phone, as I have shifted to Galaxy A71, last year. At last, oppo a37 is a great phone with exciting hidden features, but this is not good enough to use at this time.

Hayan Rashid, 04 Jun 2021It is a good phone and it has a good camera but it glitches... moreIt's an android phone from 2016 lol.
Don't expect it to run so smoothly or get much updates in future times like these.
Best bet is to use the built in cleaner or a third party one and try to reserve as much space as possible due to how poor the specs are, though I would just suggest you to buy a new phone like the Poco M3 which is really not bad for it's price and it should hold up doing normal day to day task for a while if that's what you need, phones from then and now are just almost incomparable lol.

So far it's been working really good for me. unfortunately the android system of this phone I suggest to be upgraded to a marshmallow (6.0) so it's will working great all the time.

Give screen recording in this phone

abdul ahad, 21 May 2021ohh really It is a good phone and it has a good camera but it glitches and lags alot for me idk why can some one give suggestions on how to fix it and their are no new updates