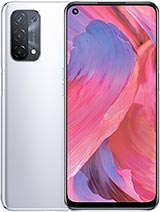 in Indonesia they increased the price of this phone by about $15 from the initial national price and now it is IDR 3,999,000. it's ridiculous to do and very disappointing of course for those who are currently saving money, it's ridiculous LOL it seems they just want to profit by taking advantage of the situation and maybe there is no intention to give the best for consumers.

Anonymous, 27 Aug 2021I see many people mistakenly thought the SD480 is a low-per... moreIt's definitely more powerful than all previous 4 series snapdragons, but it's less poweful than the SD 690 5g.

The problem is, you notice the limitations of the 480 chip when using it day to day. There is noticeable lag sometimes, slower wifi speeds, slight bluetooth connectivity issues, and browsing between apps and browsing the internet isn't as fluid as it is on an SD 730/732g powered devices.

Also, in relation to the A74 5g - the handset is VERY over priced (in some regions such as the UK).

I ran antutu v9 recently and the score was 310k, which isn't bad per se, & antutu v8 the score was averaging 250k - in general day to day light use, this is decent, but for the same price, you can get a much more powerful handset, such as the poco x3 pro with the SD 860.

Even other cheaper devices like the realme 7 5g, with the more powerful dimensity 800u, the redmi note 9t, which is much cheaper but more powerful. The price of the handset needs to reflect the performance.

It should at least be priced in the same bracket as the poco m3 pro, which has a near identical performance (though a different chipset), and a better camera with EIS.

I see many people mistakenly thought the SD480 is a low-performance SoC. Instead, it's more like a 5G version of SD730G/SD732G. Considering its overall specs and the pricing of my country (roughly around USD260), it's definitely one of the best 5G ready devices in the market. No offence though, just sharing my thoughts.

A bloody Hopeless phone. A piece of paperweight. A very expensive piece of shit

The camera result is quite good but the video recorder is horrible.. Comparing to the price, this phone is not valuable at all. I bought also redmi note10 5G which is much cheaper 70 dollars but given the same advantages. To anyone who wants affordable 5G phones i recommend redmi note10 5G.

It's not a bad phone per se - the camera/video is awful though.
slow charging.

Even though it has 90hz screen - the phone still feels slightly sluggish and slow for some reason. You can tell the processor is low budget.

One major annoying issue is - the Bluetooth. It doesn't work properly if you have the wifi hotspot on simultaneously. This is annoying.

Apart from that, it's ok. Decent screen. Battery life isn't too bad. It's definitely not worth the price though. I should have waited until their reno 6 line is released in my country.

Wow, it's so cool

Jack8v, 12 Jul 2021Very annoyed. Got this phone recently, only to discover, PW... morehow did you go about before DC dimming was a thing?

Tre, 29 Jun 2021Bought this phone 4 days ago. Did not feel overprice. T... morebro did you even use superamoled

Very annoyed. Got this phone recently, only to discover, PWM is being used when the brightness is lowered to 40% or under!!

It's an LCD. PWM was not needed.

I may have to sell it now for this reason.

Other aspects of the phone are decent (apart from the camera). But the issue with PWM is a total downer for me (as I'm sensitive to it).

Let me confirm - this device does NOT support EIS video recording in either the front or rear cams.

The stabilization offered is awful/practically zero - video footage is absolutely hideous and unusable.

Oppo really need to release a software update to fix this - as it's unacceptable considering the price of the handset, and cheaper phones (such as their own a9 2020, and redmi's etc) offer eis.

Bought this phone 4 days ago.
Did not feel overprice.
The ips lcd is so black as super amoled.
Awesome camera, gyro-EIS video support, very clear for calling, nice design, not too big and not too small, good for typing. Everything is just perfect