All bets are pretty much off when it comes to modern smartphone naming convention, or lack thereof. Still, if you're like us and felt a slight disturbance when the Oppo A7x was announced a few days ago in the absence of a vanilla version, you can breathe a little easier. 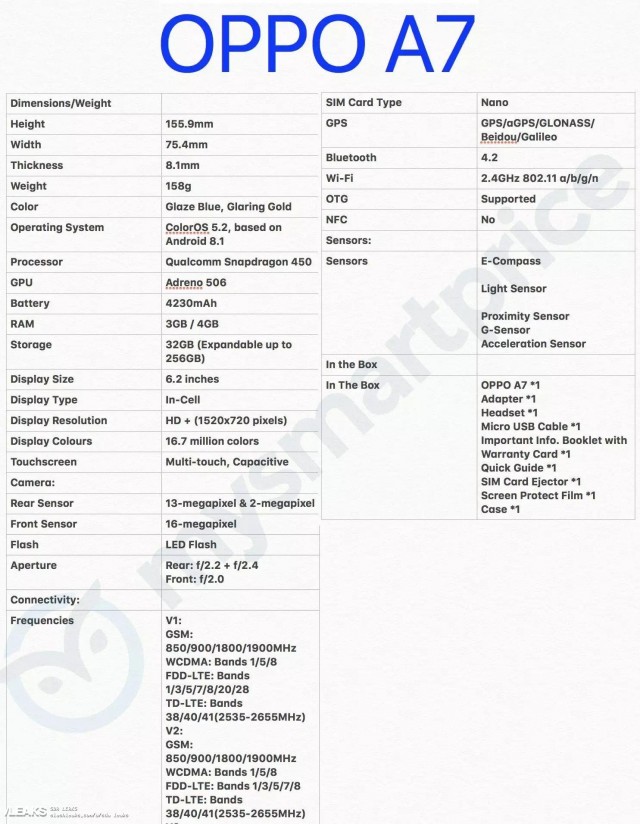 Well, kind of, since a new leak does claim to have all the specs for an upcoming Oppo A7. But, after looking at them, if that turns out to be the case, the new model won’t exactly bring much sense of order to the Chinese maker's current lineup. Whereas the A7x is a slightly tweaked variant of the Oppo F9, the A7 appears to be nearly identical to the Oppo A5.

Some of the hardware highlights and we use that term pretty loosely, since the A7 is clearly a mid-range offer, include a 6.2-inch HD+, IPS display, Snapdragon 450 and a 4230 mAh battery. In terms of memory, the leak even suggests that the new A7 will feature a 3GB RAM variant, whereas the A5 has 4GB, as standard. The same goes for base storage - 64GB on the A5 and, allegedly, 32GB on the A7. Thankfully, there is still a microSD slot for expansion.

So, what are the upgrades that constitute the higher model number? Well, from what we can tell, Oppo decided to upgrade the selfie to a 16MP, f/2.0 unit. It's still something, especially if the two aren't priced that far apart.

Its a cute device,,if you dont like it i guess you should get on to another device

this makes no sense, the spec is low end and yet its price is higher than oppo's own middle spec phones like K1. this falls back to oppo's reputation of "low spec high price" policy/stretegy and I thought K1 was beginning to change that.

not quite true, many cities bus now accept nfc payments