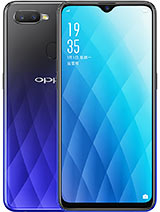 An Oppo F9 with a slower charging speed

Does this Oppo AX7 has NFC? Not listed under specs here.

R u mad oppo company. This mobile have 6.3 inch display and battery only 3500mah.

Nane of sensor of camera selfie?????

fardin, 22 Sep 2018oppo keep releasing craps with cheap Chinese processor. the... moreKirin is better and is actually Chinese, Mediatek is a Taiwanese company so what are you trying to say now? China has better than both Taiwan and Korea (Exynos by Samsung) so you failed hard bud...

AS×Articuno23, 14 Jan 2019Because mediatek is bad processors with bad Mali videochips. Mali is not bad! Its just that it has MP3 which means 3-cores rather than a MP10 Huawei Kirin has or MP12 which Samsung Exynos has in Europe, tough the Exynos is inferior to the Qualcomm chip so by your logic, ANYTHING THAT IS NOT MADE BY QUALCOMM IS SHIT?! O3O

Should i get this phone or Hwawei Nova 3i?

fardin, 22 Sep 2018oppo keep releasing craps with cheap Chinese processor. the... moreMediateck isn't chinese it's from taiwan
And helio series isn't bad at all it is very good and in pair with snapdragon
And btw why hating chinese processor (and it is not chinese )when looking at a chinese phone?

Avenged Sevenfold Phone?
This is should be every Jamet phone.

Oppo's R series phones are best. Unfortunately they have stopped releasing it in India.

perfect mobile in dudget series .when it lunch in India n Nepal?

Anonymous, 23 Sep 2018Mediatek chips nowadays are not bad actually, I was a bit s... morethey are smooth at first but slow down several months later.

Anonymous, 19 Sep 2018avenged sevenfoldPlanning to get this phone just because of A7X. \m/

fardin, 22 Sep 2018oppo keep releasing craps with cheap Chinese processor. the... moreMediatek chips nowadays are not bad actually, I was a bit skeptical to use it initially, but after trying out a phone with P20 Mediatek chips is actually quite smooth & totally no lag or whatsoever issue.