Oppo F11 Pro pops up on Geekbench with Helio P70

Oppo teased the upcoming F11 Pro with a 48 MP main shooter and an elevating front-facing camera. The company has been silent on any additional specs, but we now know what the chipset and RAM will be, thanks to the phone appearing on Geekbench.

The Oppo F11 Pro, codenamed CPH1969, was listed with Helio P70 and 6 GB RAM, and according to the entry, will ship with Android Pie out of the box, likely used as a base for Color OS 6. 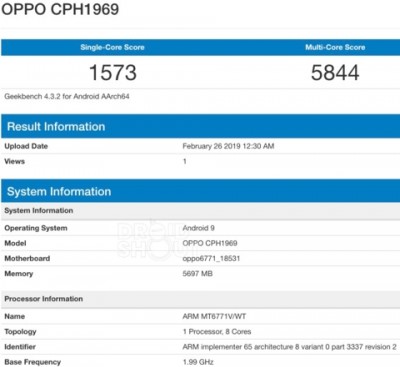 The results yielded in the benchmark look plausible, comparing the F11 Pro with the other Helio P70-powered smartphone we reviewed - Realme U1. We see 1571 for a single-core score and 5844 for multiple cores, which are numbers pretty much in line with other midrange chipsets.

The rest of the specifications and features is yet to be announced, but the full sheet leaked last week, revealing a 6.5” screen, 4,000 mAh battery, and up to 128 GB storage. Whether this is true or not is yet to be confirmed once we have an announcement date from Oppo.

This could become realme 3 pro after few months.