Oppo unveiled the F15 back in January and now the company is set to introduce its successor, dubbed Oppo F17 Pro.

Oppo's Indian branch took to Twitter to tease the F17 Pro and posted a short clip that says the F17 Pro is "coming soon". The video also shows us the left side of the phone, which is home to the SIM card slot and volume rocker.

We can also see the camera bump that hints at the F17 Pro featuring dual rear cameras, which is actually surprising since the F15 came with quad rear cameras. However, there's also the possibility of the F17 Pro having four snappers on the back arranged in a square formation, which is why we are only seeing two cameras from this angle. We'll have to wait for more information to be sure.

Want a new way to flaunt? 🤩 The sleekest phone of 2020 is on its way. Stay tuned. #OPPOF17Pro #FlauntItYourWay pic.twitter.com/LVmAKE1jE1

Oppo hasn't divulged any specifications of the F17 Pro, but it is promoting the smartphone as the "sleekest phone of 2020" and revealed that it will be 7.48mm thin and weigh only 164 grams. This makes it thinner than the Oppo Reno4 Pro global variant, which is one of the lightest smartphones we got our hands on in recent times.

In a press release, Oppo said that the F17 Pro, which is targeted at young trendsetters, will have a thin 220-degree edge to give you a more comfortable and smoother in-hand feel of the device.

Another bit of information revealed by Oppo is the price. The image shared with the press note includes text at the bottom that says the F17 Pro is the sleekest smartphone within the INR25,000 ($335/€280) segment in 2020. 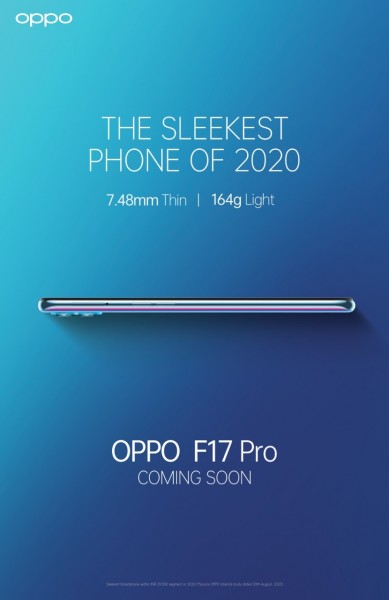 There were rumors about Oppo launching the F17 in early September as the sleekest smartphone, but our sources tell us that it's only the F17 Pro that's coming right now, and there's no word on the vanilla F17.

Oppo hasn't revealed the launch date of the F17 Pro yet, but we know it will be sold through Amazon.in in India.

oh buy why you are comparing a phone with 2000mah with 4000mah n a phone with 1camera n 4cameras on the back ?

Its mentioned that it is the sleekest phone of 2020, MS Lumia is old.