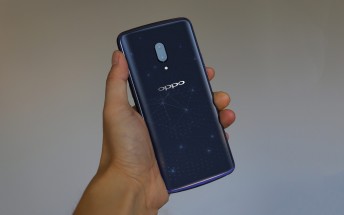 A Twitter post just revealed almost all of the specs of the upcoming Find X flagship from Oppo leaving only the design behind the curtains. At first glance, the Find X will feature specs that are pretty close to vivo NEX, which is normal given that both companies are closely related.

Anyone excited about Oppo Find X? I have full official specifications of it and will be sharing it with you in my next tweet in this thread itself! Got it from a very trusted source. Let's see if you like them or not!#Oppo#OppoFindX pic.twitter.com/w9PXZztUmW

Anyway, the Find X's specs sheet lists a 6.4-inch 1080 x 2340 screen backing up the previous claims that the device will come with curved Super AMOLED display from Samsung. It continues with the top-of-the-line Snapdragon 845 with 8GB of RAM, 128GB of internal storage (the official tease points at 256GB variant as well), and a 3,730 mAh battery to power it all.

The dual camera at the back is expected to feature a 20MP (f/2.0) and a 16MP (f/2.0) sensor capable of 5x zoom while the front-facing sensor is going to be 25MP (f/2.0). We don't know, however, if the phone will be truly bezel-less by leaving behind the notch or the front-facing camera will be on the chin. It could also pop up like on vivo's NEX.

One thing is for sure, though, with dimensions of 156.7 x 74.2mm and a large 6.4-inch screen, the device will boast an impressive screen-to-body ratio while being fairly thick (9.6mm) by today's standards.

No word of the fingerprint sensor location or the design for now but the leaked hands-on photo suggests that the Find X won't feature a rear-mounted scanner so an in-display fingerprint might be part of the deal. We will know for sure on June 19.

Just like how there are supporters for the notch, there are those who are against it. Samsung sticks to it's design language to cater to those abhorrent at the thought of a notch.

No it is not. Tried watching a movie to an 5.5 inch one plus 3t , it was absolutely tiny, then tried on the new oneplus, it was positively twice as big. Being taller, those screens, means they gain exactly where they need it...

5.7 is huge. It is note size, i.e, the prototypical phablet. Then again everybody and his dog is using a phablet these days so those sizes are strangers to none.