The Oppo K3 that's slated to go official on May 23 has been listed on the company's official website confirming its design and a few of its specifications.

In terms of design, the Oppo K3 looks like an amalgam of the Realme X and Oppo Reno. It has a selfie camera popping up from the center of the frame like the Realme X, and a back which houses two snappers in the center like the Reno. 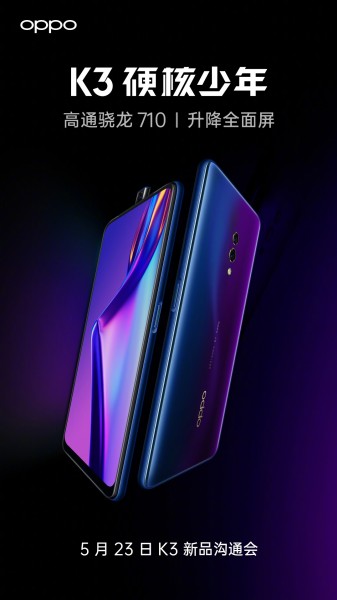 Talking about the specifications, Oppo has already confirmed that the K3 will come with Snapdragon 710 SoC under the hood. Now, this Chinese phone maker has further confirmed a 16MP selfie shooter, a 6.5-inch AMOLED screen, and an in-display fingerprint reader on this mid-ranger.

The Oppo K3 will also come with LPDDR4X RAM, UFS 2.1 storage, and Game Boost 2.0. It will be offered in three colors - White, Green, and Blue.

A lot of us are happy with rear FP sensors, convenient & quick. Nice to see "USB C".