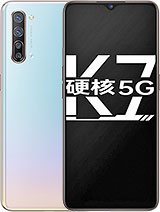 Anonymous, 04 Nov 2020With an Adreno 620 on board it should be a good gaming devi... morehow about war commander roque assault ? does gonna survive?

With an Adreno 620 on board it should be a good gaming device, I have an Adreno 506 (Xiaomi Mi A1) which works well as a gaming phone (whatever games I have thrown at it have worked and I am quite a heavy gamer, even testing Handheld console level games it seems to be optimizable to give a good experience) therefore this Oppo K7 5G device has generally better specs in a number of areas suiting for games so should be no problem for it to be used as a gamer phone for a gamer ^_^ though personally I am pretty keen to try out a Xiaomi 10T 5G Lite to fill this role for myself as it has a nice refresh rate and competitive price point while retaining good graphic ability for games (ie: Adreno 619).

When Oppo K7 will launching in India? Mid November???

guys.. is it worth for gaming?

Danny, 08 Aug 2020Good but no sd card slot . With out slot people will not acceptI will, type C SSDs

Good but no sd card slot . With out slot people will not accept

They copied the HTC U20 5G's camera design.

nice package..! Is it coming to India?

Dear oppo
Before making a mid-range mobile, do a survey of what the mid-ranger wants