Oppo will unveil the K7x tomorrow and it has already confirmed that the smartphone will feature a side-mounted fingerprint reader, sport a punch hole display with 90Hz refresh rate, and support 5G networks. Today the company posted a couple of teasers on Weibo, revealing the K7x's camera and battery specs.

From a previous official poster, we already know that K7x will sport a rectangular camera island on the back. Today's video teaser reveals it will include an LED flash and four cameras, placed in an inverted 'L' formation, with the primary unit having a 48MP sensor.

You can also see that the right frame of the K7x has a fingerprint scanner, with the volume rocker and SIM card slot on the left side.

A separate teaser posted on Weibo by Oppo confirms the K7x will pack a 5,000 mAh battery with 30W charging, and it will come with a 3.5mm headphone jack placed at the bottom next to the USB port. 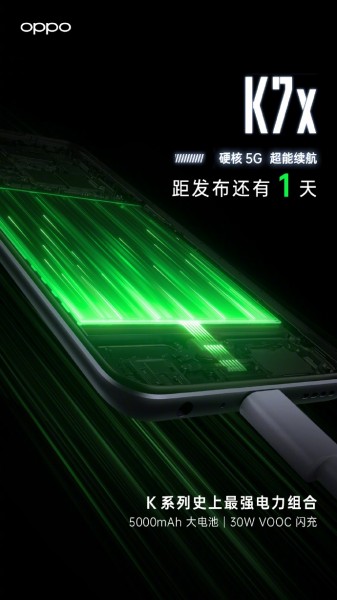 We'll find out the rest of the specs of the Oppo K7x along with its pricing and availability tomorrow.

Oppo K7x coming on November 4 with a big battery

Why they don't realease globally?

oppo/ realme deserves a guinness world record for the most phones released in a fy. hope the authorities will consider them 👏