The Realme 2 Pro may pack a whole bunch of new hardware on the inside, but its exterior, while painted differently, is the same as on the Realme 1 and 2. And that's not a critique, we liked those handsets a lot.

The company released three phones in less than six months, which explains why different takes on the design were out of the question. Still, Realme did find a way to make those devices unique - with cool paint and diamond patterns on the back. And now the Realme 2 Pro continues to use its rear panel as a canvas. 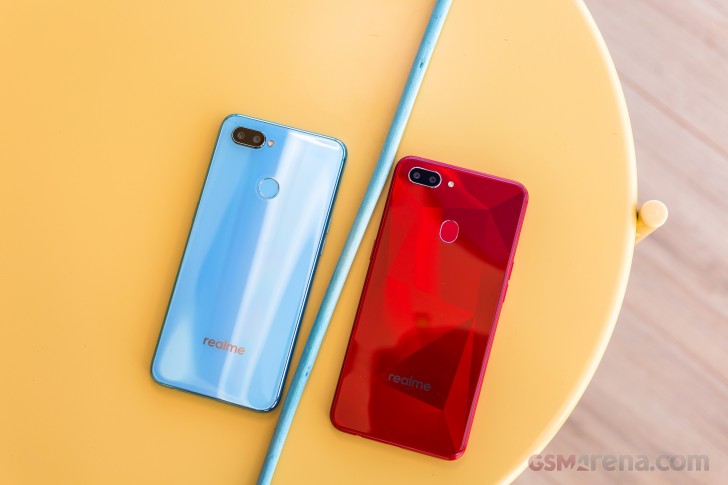 Realme 2 Pro next to the Realme 2

The diamond-patterned Realme 1 and 2 were stunning, no doubt, but the Oppo-backed company wanted to do things differently and the third phone in the series impresses with its uniform color instead of 3D-like patterns. Exit diamonds, enter the Ice Lake hue! 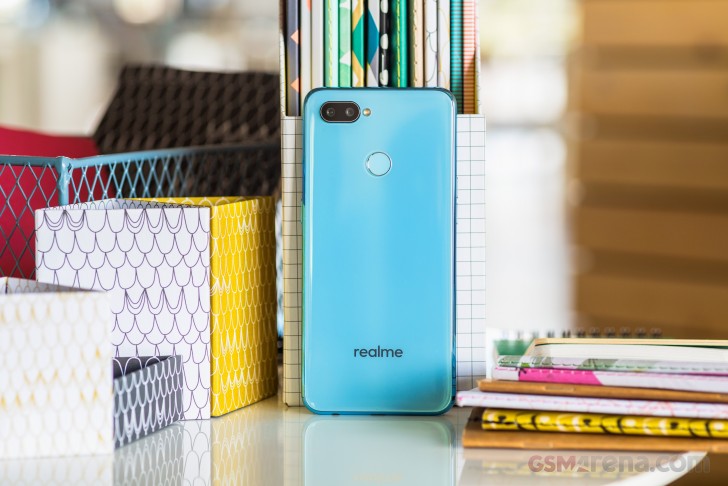 Realme says the Ice Lake paint was inspired by the bitterly cold Arctic Ocean and you can almost feel it looking at that mesmerizing back. Once again, Realme made one very catchy phone by just mixing the right hue for its paint.

But enough about the back. The front has one of the key features the Realme 2 Pro relies on to win a lot of users - the large 6.3" with a small dewdrop-like notch for the camera. It's a huge step over the chunky cutout we saw on the Realme 2, and one of the most non-intrusive notches we've seen so far. 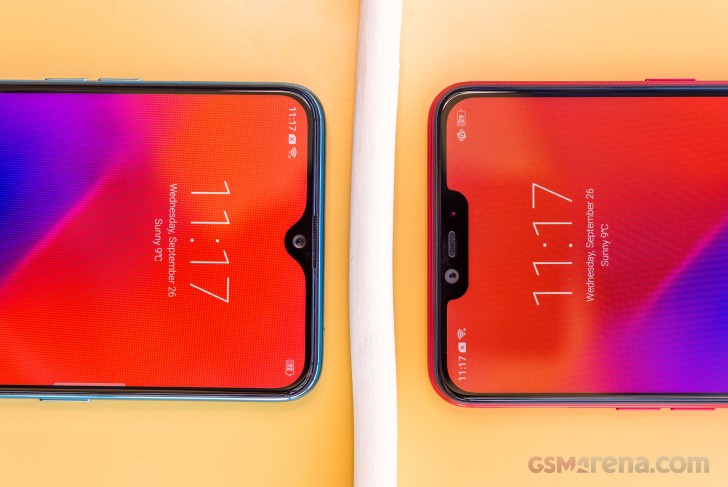 Both Oppo and Vivo had ideas how to make the notch less irritating. The Oppo F9 was the first with this waterdrop-like notch, while Vivo chose to use the Essential shape for the cutout. We can't decide on who did it better, but both notches surely look better than the large dark strip on the previous Realme 2. 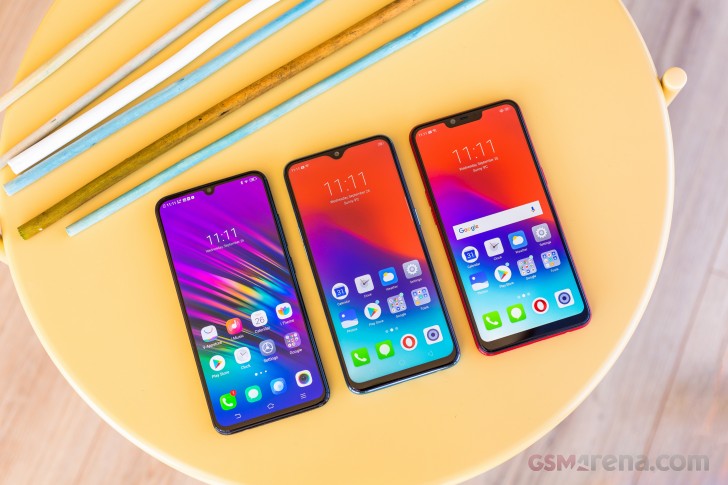 And while we are on it, the V11 and the two Realme phones are perfect specimens of how the smartphone colors have evolved over the course of the last year. 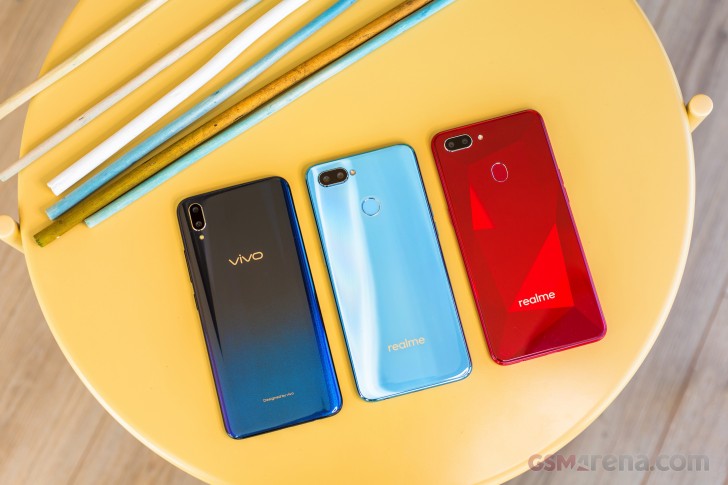 The dewdrop notch houses the 16MP selfie camera and a well-hidden proximity sensor. That's it, there is nothing else. The obligatory earpiece is hidden within the thin display enclosure that separates the screen glass from the frame, and it's barely noticeable. 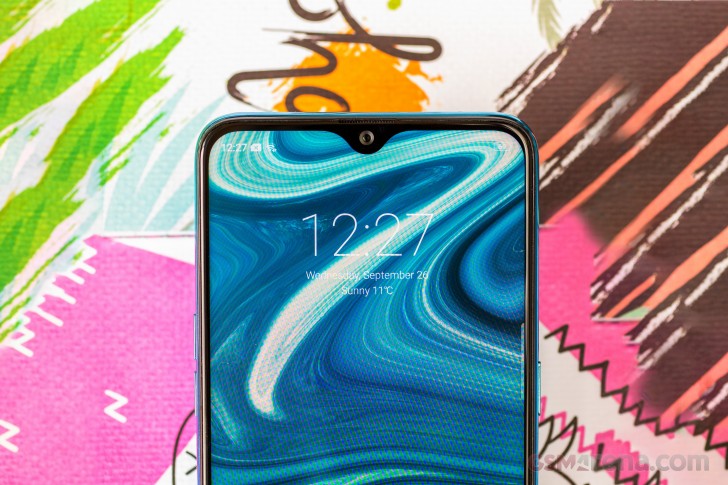 The whole screen is covered by a Gorilla Glass 3 piece. There is a screen protector, which was applied in the factory.

The 6.3" display is almost bezel-less, with the almost coming from the tiny chin at the bottom needed to hide the display controller. 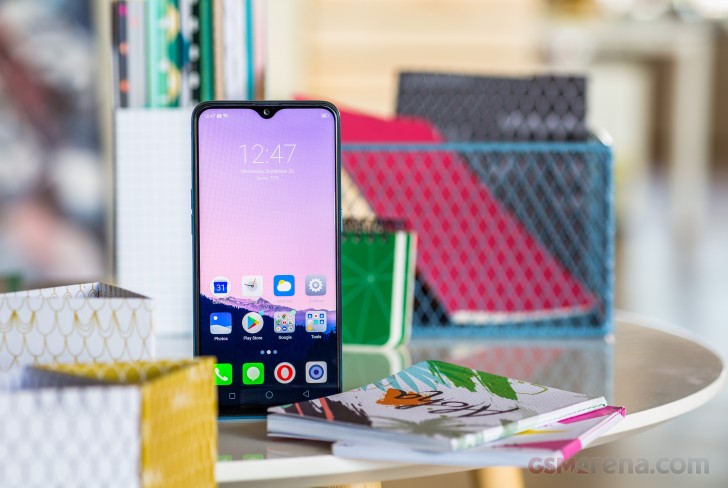 The frame is made of polycarbonate and also comes in this nice arctic color. It has a glossy finish, which makes it both slippery and susceptible to fingerprints and smudges. Then the back looks a lot like glass, but it's actually made of plastic. Realme promises both the frame and the back panel to be very sturdy and heat resistant. How tough exactly we can't tell, but what we can share is that this glass-like panel is not as slippery as it looks. On the contrary, it balances the glossy frame very well and offers one very secure grip. 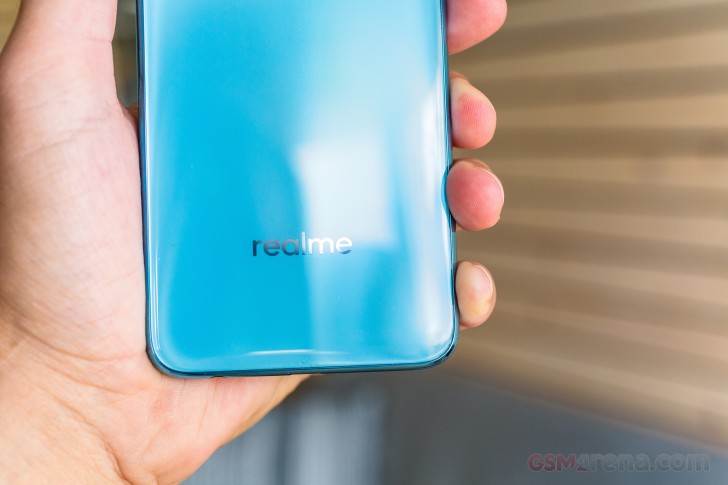 The new dual-camera sits on a small hump at the back. It has a new 16MP sensor with a bright lens, but it keeps the 2MP snapper for depth sensing. The round fingerprint scanner is also around, always-on, and with blazing-fast and accurate recognition. 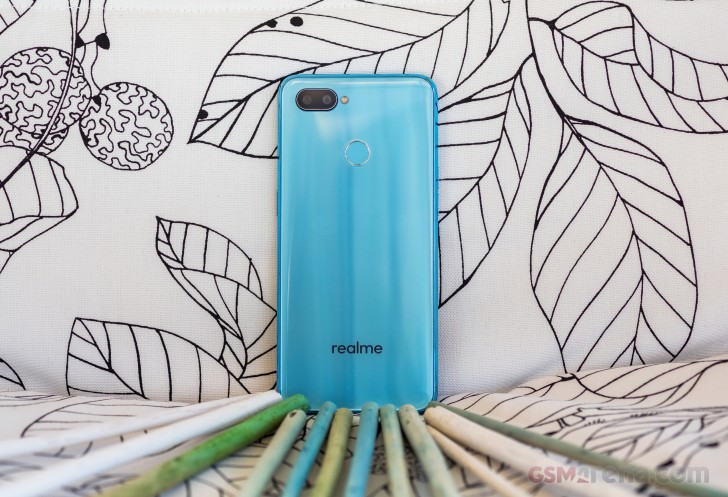 We already mentioned the Realme 2 Pro hasn't changed much in shape since the Realme 1 and 2. The Pro spreads at 156.7 x 74 x 8.5 mm and weighs 174g - just a millimeter and a half narrower than the previous Realme phones.

The Realme 2 Pro has a single speaker at the bottom, next to the dated microUSB port. There is also a 3.5mm audio port, and the phone offers the so-called tri-card slot. The tray easily fits two nano-SIMs and a microSD card.

The Realme 2 Pro is yet another looker from the Oppo-backed maker. It might not have the diamond-patterned back, but Realme is surely on the right path with this new signature paint job. The Pro also has one of the trendiest screens right now that contributes to the hypnotizing looks and will surely lure a lot of potential buyers. Same using it since its launch in 2018. No issues yet. Still works fast . Overall excellent.