Oppo is getting ready to launch the Reno3 Pro in India. Although it has the same name, this won't be identical to the Reno3 Pro that got official in December. Compared to the Chinese version, there will be some differences, chief among which is the use of a different chipset. That's because the Chinese Reno3 Pro uses the Snapdragon 765G, which is a 5G SoC, while the Indian model will top out at 4G only.

This information comes from Tasleem Arif, Oppo's VP and Head of India R&D. He says the company is preparing "a pipeline of products" with 5G for India later this year. 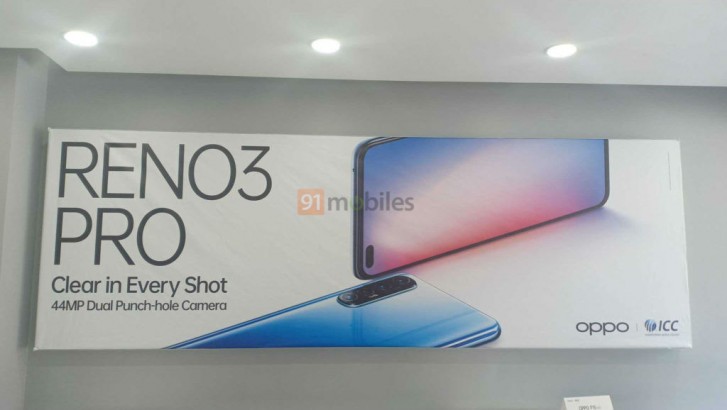 Moving on, the poster you can see above leaked telling us that the selfie cam setup will be different in the Indian Reno3 Pro too. As you can see, this time around Oppo is going with a dual punch-hole, with one of the cameras having 44 MP resolution. This is in contrast to the 32 MP single selfie shooter on the original. The 44 MP resolution is a world's first on the face of a phone, though it's unclear if pixel binning will be used to achieve 11 MP selfies.

The secondary unit on the front of the Indian Reno3 Pro will be a depth sensor to aid in Portrait Mode shots. Otherwise, the Reno3 Pro that will soon arrive in India should be identical to the Chinese model. So expect a quad rear camera setup with a 48 MP main sensor, a 13 MP telephoto, an 8 MP ultrawide, and a 2 MP monochrome snapper.

I don't know about pricing but its coming with new processor mediatek helio p95 and vooc 4.0... And you can also use three accounts like 3 users can use this phone with there own passwords apps and data.