Oppo will soon add a new letter to the Reno5 alphabet – two versions of the Oppo Reno5 A have been spotted at the Google Play Console. One of them will be SIM-FREE (CPH2199), the other is headed for Japan’s SoftBank (A101OP). This comes about a year after the Reno3 A was unveiled in Japan. 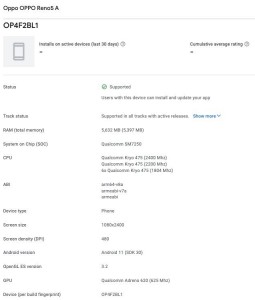 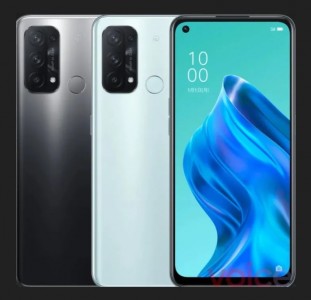 The original Reno A phone never made its way West, not even under a different name, so unless Oppo has changes its regional strategy you may never see this one in a store near you. Here’s a quick look at what you’ll be missing out on.

The Reno5 A is powered by the same Snapdragon 765G chipset as the Reno5 5G, though it starts with less RAM, 6 GB. The phone will run Android 11 with out of the box. The SIM-free model will support the n78 band, while the one for SoftBank (and MVNOs that run on its network) will feature the n39 band.

The display appears to be the same as on the 5G model, a 6.43” AMOLED panel with 1080p+ resolution and 90 Hz refresh rate, though the GPC isn’t quite so detailed.

A render shared by @evleaks shows a quad camera on the rear with a layout identical to that of the 5G model (which has a 64+8+2+2 MP setup). The render confirm the 64 MP main module and also shows a fingerprint reader on the back (the fancier Reno5 5G has an in-display reader).

Oppo unveils Reno3 A in Japan

Yeah, they are expensive alright. The periscope on the honor 30 and honor 30 pro costs more to replace than the imx600y main sensor. Must cost a thing of nothing to throw on a 2mp macro or depth sensor.

From what I hear, the price of periscope lenses increased a lot this year. It's also not often used by most people. So many brands do not use them even in the flaships.