Oppo’s Reno5 series is launching in a couple of hours in China and we’re expecting three phones – the Reno5 5G, Reno5 Pro 5G and Reno5 Pro+ 5G. The latter was the subject of a fairly detailed leak last week but tipster Digital Chat Station managed to squeeze another one just before the launch. 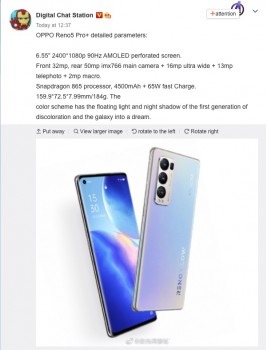 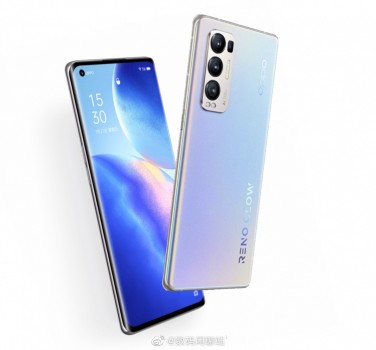 The top model in the Reno5 series will be powered by the Snapdragon 865 chipset and will sport a curved 6.55-inch FHD+ AMOLED display with a 90Hz refresh rate. The camera setup includes a 50MP primary Sony IMX766 sensor alongside a 16MP ultrawide snapper and 13MP telephoto module. The fourth module on the back is said to be a 2MP depth helper. The selfie shooter should come in at 32MP.

We’re expecting a 4,500 mAh battery with 65W fast charging. The dimensions of the Reno5 Pro+ are listed at 159.9 x 72.5 x 7.99mm while the weight should come out to 184 grams. Last week’s leak also mentioned the Pro+ could be the first Oppo phone to come with a color-shifting electrochromic back as seen on the OnePlus Concept One though it remains to be seen if this is indeed true. Stay tuned for our full coverage of the Oppo Reno5 series.

How ? Can you explain?