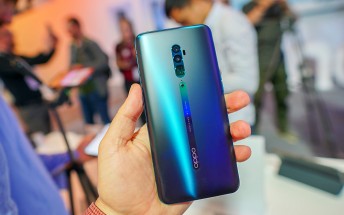 Following their world debut in China, and then their international launch last month, the Oppo Reno and Reno 10x zoom are now ready to enter the UK as well.

The Chinese company has officially announced the launch details for the UK. The vanilla Reno is going to be the first to make the trip across the pond, arriving on June 5 for £449. The Reno 10x zoom will join it one week later, on June 12, priced at £699.

It looks like Oppo is getting serious about increasing its official presence in Europe, and that's good to see because more competition is always going to benefit consumers.

The Reno 10x zoom on the other hand sports a bigger 6.6" display with the same resolution, the Snapdragon 855 at the helm, the same storage options, the same main camera but with an 8 MP ultrawide companion and a 13 MP periscope lens that enables 5x optical zoom. The same selfie cam is baked in, but the more expensive model has a beefier 4,065 mAh battery.

People don't understand that starting from 2017 china changed the stratgy from quantity to quality. This is not clear for people who always attack the chineese phones because they have black history and bad ideas about these products before 2017. ...

Knowing the Chinese version pricing, this is a bit too much even when accounting for VAT, IMO. Dear GSM Arena, please let us know if this Oppo Reno 10x Zoom's review is in the work. Thanks. :-)