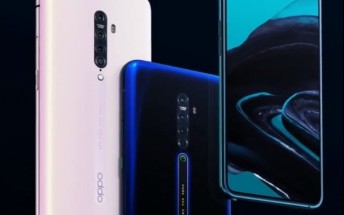 Oppo is launching the Reno2 with the same overall design, but its fans at the home scene in China will have to wait until September 10. The company announced an event in Shanghai for the launch that will also see the wireless noise-canceling earphones Enco Q1 on the stage.

Meanwhile, the Indian department is already preparing for the global unveiling, scheduled for August 28. The phone is clearly ready to hit the market, as AnTuTu revealed its overall score during the weekend - it is exactly 259,109.

We already know the phone will have the updated Snapdragon 730G chipset, but it will also have 20x zoom. Unlike the first Oppo Reno, the Reno2 will not have a periscope camera - it will rely on good old optics to reach 5x hybrid zoom, while the 20-times increase will be digital. It will also come with upgraded stabilization, as confirmed by the company VP.

As for the AnTuTu result, it is a sum of the GPU, CPU, UX and memory scores. The Reno2 is going to be among the first devices on the market with the Snapdragon 730G, which is essentially the same as the SD730, but with higher GPU clock speeds.

We have no Oppo, Vivo or Reno brands in central europe in Slovakia so i dont give a stab,

The first Oppo Reno didn't have a periscope either

IÂm working in Oppo. We got one demo peace of Reno2